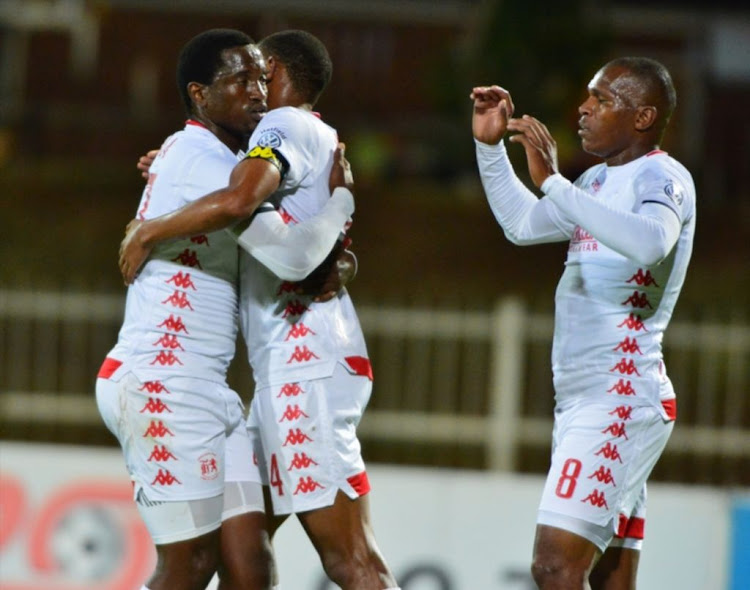 Mothobi Mvala of Highlands Park celebrates goal with team mates during the Absa Premiership match between Polokwane City and Highlands Park at Peter Mokaba Stadium on December 11 2018 in Polokwane. Mvala has moved up to the top of the league’s goalscoring charts.
Image: Philip Maeta/Gallo Images

Mothobi Mvala shot to the top of the league’s goalscoring charts while Highlands Park moved into the top eight of the standings as the visitors got their first away win of the season after beating Bloemfontein Celtic 2-1 in sweltering conditions on Monday afternoon.

It was‚ frankly‚ far too hot to play decent football and the hard surface did not help matters either as the ball bounced around like on a tennis court at times although the game ended under a deluge from a late afternoon rainstorm.

Peter Shalulile scored the other for Highlands Park‚ who played most of the second half down to 10 men‚ while Kabelo Dlamini pulled one back for Celtic‚ who have now lost their last three matches.

But‚ despite the conditions‚ Highlands‚ who looked far fitter than their hosts‚ kept up a good regime of pressing and harrying the Celtic players‚ forcing mistakes and turnover of possession.

They made good use of the flanks with right-back Luckyboy Mokoena delivering a good supply for the attackers and keeping the Celtic defence firmly in their own half.

Shalulile could have given Highlands a 13th minute lead as he peeled away from his marker and was perfectly positioned to receive Lindokuhle Mbatha’s pull-back pass‚ but then fluffed his shot.

Mvala then missed with a header as he timed his late run into the penalty perfectly in a warning of what was to come.

Celtic winger Menzi Masuku had a half chance at the other end in the 25th minute but chose not to shoot when he should have pulled the trigger.

Seven minutes later Highlands went ahead as Mvala again towered over the home centre-backs as he got his header onto a cross from Mokoena.

Kabelo Dambe‚ taking over from Patrick Tignyemb in goal for Celtic‚ made a fine initial stop but Mvala calmly hammered the rebound into the roof of the net for his sixth goal of the league season.

Soon after half-time‚ Ndumiso Mabena was away on goal and shoved from behind by rookie fullback Phoka Mofokeg just on the edge of the penalty area.

After consulting his linesman‚ referee Victor Gomes sent off the defender in what looked a harsh decision.

But Mabena fluffed the result freekick.

The dismissal forced Owen da Gama to change his formation to deal with the numerical disadvantage but despite being down to 10 men‚ the visitors went 2-0 up just past the hour mark.

A long throw from Mokoena was not cleared by the Celtic defence and Shalulile hooked the ball into the net.

But Dlamini’s perfectly executed dipping freekick pulled one back just four minutes later‚ setting up an exciting late finish as Celtic pressed‚ unsuccessfully‚ for a share of the spoils.