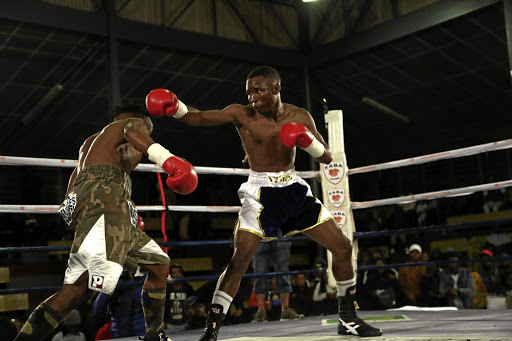 The 19-year-old rookie did not even a break a sweat when he dethroned veteran Bongani Silila in the third round of the bout that formed part of Xaba Promotions and Events' Night of the Champions tournament at Orient theatre in East London on Friday evening.

The last local boxer to win a national title in his fourth bout was Thabiso Mchunu, capturing the cruiserweight belt from war veteran Patrick Madzinga in 2008. Mchunu was 20 at the time.

But the record is held by Vic "The Benoni Bomber" Toweel who won the bantamweight strap in his third bout in 1949.

Like Tyirha and Mchunu, a 21-year-old Toweel defeated a battle-marked veteran in Jimmy Webster at Wembley Stadium in Johannesburg.

Meanwhile, Nkosinathi "Mabere" Joyi proved he is still a force to be reckoned with at 35. The former IBO and IBF mini flyweight champion stopped Mpho "Turbo" Seforo in the seventh round to claim the vacant WBO Africa junior flyweight title.

Marios Matamba of Congo knocked Siseko Makeleni in the fourth round to win the WBO Africa junior welterweight belt.