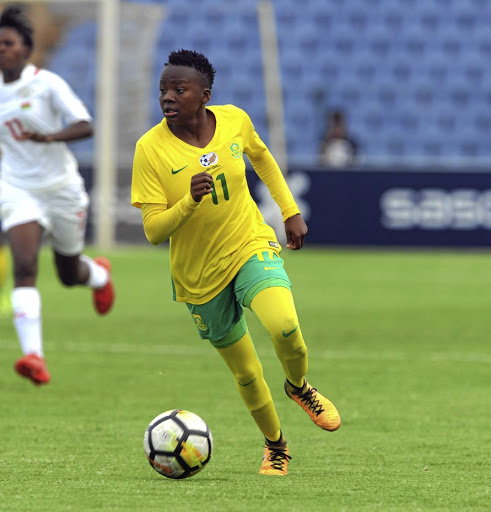 Banyana Banyana's Thembi 'Pikinini' Kgatlana will have to bring the magic once more on Tuesday, in a semifinal match dubbed a 'final' by coach Desiree Ellis.
Image: Sydney Mahlangu/ BackpagePix

Banyana Banyana's Africa Women's Cup of Nations (Awcon) semifinal against Mali on Tuesday is their final‚ South Africa coach Desiree Ellis said after her team progressed past the group stage with a 1-1 draw against Zambia on Saturday night.

Ellis was quite critical of her charges' performance against Zambia at the Accra Sports Ground in the Ghanaian capital‚ saying it was a "wake-up" call for her team.

The result saw South Africa avoid Cameroon in the semi-finals by finishing top of Group B on seven points.

A win against Group A runners-up Mali in Cape Coast will not just put Banyana into Saturday's final‚ but also see them reach what they have said is their primary goal at the Awcon of qualifying for the 2019 Women's World Cup.

Banyana took their foot off the gas a little against Zambia from their tearaway start to the Awcon‚ where they had beaten 10-time winners Nigeria 1-0 in their opener and then hapless twice victors Equatorial Guinea 7-1.

Emerging global 22-year-old superstar Thembi Kgatlana blazed SA ahead with a half-volley driven into the top-right corner in the eighth minute for her fourth goal of the tournament. Rachael Kundananji equalised two minutes later.

Banyana dominated and had their chances to wrap up the game‚ but had to settle for a draw.

"It's not the first time after scoring that we gave away immediate opportunities after that. Thembi also could have sealed it once again‚" Ellis said afterwards.

"But it's good that it happened now. We are still in the competition. It's a wake-up call.

"It cannot happen again. We have to be on top of our game. And that is one of the things that you will learn in this tournament.

"You cannot settle down for one minute. You've got to be on top of your game all the time because there are no easy team around.

"And if you're not on top of your game for the full 90 minutes you could be out of the competition.

"Zambia gave us a tough time. I felt we gave as good as we got. We are happy with the performance‚ not the result."

Banyana's form has put them firmly in contention to finally improve on three times being finalists in the Nations Cup‚ and win for the first time.

Banyana Banyana marched into the semifinals of the 2018 Africa Women's Cup of Nations (Awcon) with a 1-1 draw against Zambia in their final Group B ...
Sport
3 years ago

"And that's been our motivation and our ultimate goal.

"But we have shown that we can also grind it out. And I think that's important - grinding out results.

"But the motivation is: one game to go. You win that one‚ you qualify for the World Cup.

"We will go back and regroup because it's a big match. It's our final‚ that semifinal."

If Banyana lose in their semifinal they will have one more chance to reach France 2019‚ in the third/fourth-place playoff. The top three teams reach the World Cup.