Banyana can smell top spot after another masterclass 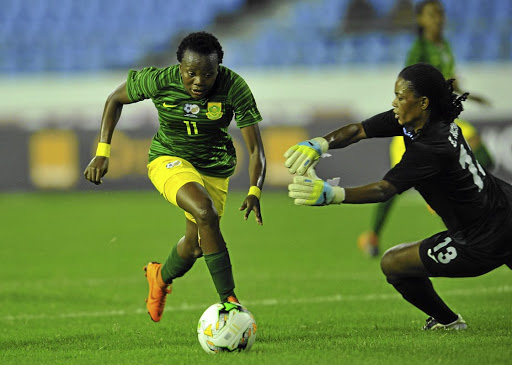 To maintain their top spot in Group B of the Africa Women's Cup of Nations, high-riding Banyana Banyana need to avoid a defeat in their last group match against Zambia at the Accra Sports Stadium tomorrow (6pm SA time).

Banyana are top of the group after annihilating Equatorial Guinea 7-1 on Wednesday. The defending champions Nigeria and Zambia are tied on three points, but the Super Falcons have a better goal difference.

Only the top-two finishers qualify for the semifinals. Should Banyana lose to Zambia and Nigeria win against Equatorial Guinea, head-to-head and goal difference rules will come into play.

Banyana attacker Jermaine Seoposenwe, who scored the last goal against the central Africans, was optimistic SA will advance to the knockout phase of the tournament as the top-placed team. The Cape Town-born attacking midfielder reflected on why so many goals against Equatorial Guinea were a need.

"I think we've put ourselves in a good position because we are top of the group heading into the last match. I am positive we will also win against Zambia," said Seoposenwe.

"All the matches are not easy, but through teamwork we can go far. Sometimes it comes down to goal difference, so it was very important to score those goals against Equatorial Guinea. We do not want to find ourselves on the back foot."

In the wake of their big win over Equatorial Guinea, Banyana mentor Desiree Ellis was excited to see her charges sharing the responsibility of scoring. It was only Thembi Kgatlana who grabbed a brace, as the other five strikes were scored by various players.

"The beauty of it is that we scored so many goals. Amanda [Mthandi], getting her first goal. Mpumi [Nyandeni] starting and getting a goal even Fifi (Jane) came on and scored. Thembi got her usual two. Jermaine also scored," said Ellis.

"It's good we had so many scorers and we do not rely on one individual because that had been a problem in the past. It's so important not to lose focus of why we are here [in Ghana]."