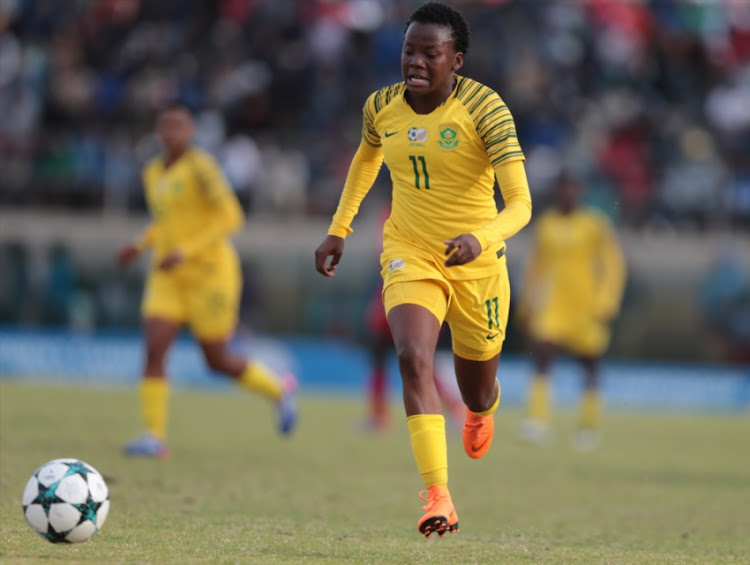 Thembi Kgatlana scored twice as a rampant Banyana Banyana cruised to a 7-1 victory over Equatorial Guinea and the brink of the African Women’s Championship semifinals in Cape Coast on Wednesday.

The victory leaves the South Africans top of Group B and needing just a point from their final pool game against Zambia on Saturday to make sure of a semifinal spot as they tore Equatorial Guinea to shreds with pace and precision passing.

Linda Motlhalo had opened the scoring from the penalty-spot and Nompumelelo Nyandeni added a second, but some poor defending allowed Elena Nkuandum to pull one back for the Central Africans.

But the second half was all Banyana as Refiloe Jane added a third and Kgatlana a quick-fire brace, before Amanda Mthandi and Jermaine Seoposenwe got their names on the scoresheet.

Banyana must finish in the top three in this tournament to achieve their aim of qualifying for the FIFA Women’s World Cup in France next year.

Leandra Smeda should have put Banyana ahead after just a minute when Equatorial Guinea failed to clear a corner and the midfielder, who has spent part of 2018 playing in Lithuania, saw her point-blank effort saved by Emiliana Ndong.

Banyana were awarded a spot-kick on 19 minutes when defender Dorine Chuigoué handled the ball in the box and Motlhalo buried her effort into the bottom corner.

Motlhalo had a hand in the second two minutes later as well when her fine ball set Kgatlana clear on the right.

She turned her defender and laid the ball on a plate for Nyandeni to score her 39th Banyana goal in her 145th appearance.

Kgatlana was denied a third before halftime when she had the ball in the net after a superb lay-off from Seoposenwe, but the latter was incorrectly ruled offside.

It was rather Central African side who scored next as Smeda failed to clear a low cross, putting the ball on a plate for Nkuandum to blast home.

Banyana coach Desiree Ellis introduced Jane at halftime for Kgaelebane Mohlakoana and the side started the second half with more purpose, Kgatlana blasting over the top after a well-worked move.

The third goal did arrive as Kgatlana got in behind the Equatorial Guinea defence for the umpteenth time and faced only with Ndong, laid the ball off for an easy tap-in for Jane.

Banyana had found their recipe for goals as Kgatlana pounced on another ball over the top of the hopelessly outpaced Guinea defence and she easily rounded the keeper to score a fourth.

Minutes later and it was déjà vu, Seoposenwe’s ball split the Guinea defence and Kgatlana rounded the keeper for a second time in three minutes to grab her second.

The sixth and seventh goals came in quick succession as both Mthandi and Seoposenwe found themselves in acres of space in the box to punish the woefully outclassed Guinea side.