Banyana walking on air after 7-1 humbling of Equatorial Guinea 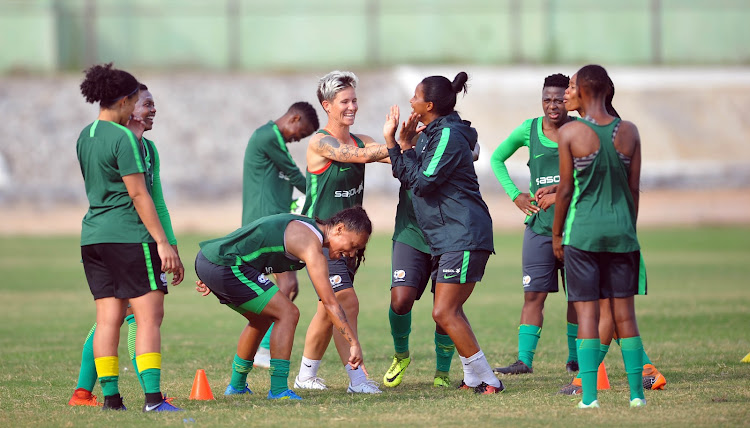 Banyana Banyana players share a light moment during training at their base at Ndoum Stadium in Ghana on November 19 2018.
Image: Sydney Mahlangu/BackpagePix

Banyana Banyana vice-captain Refiloe Jane says the team go into their final African Women’s Championship Group B clash with Zambia on Saturday full of confidence after the thumping 7-1 victory over Equatorial Guinea on Wednesday.

Coach Desiree Ellis’s side dominated the game throughout but only held a slender 2-1 lead at half time‚ before running away with the encounter in the second period as they used their pace and precise passing to overwhelm the tiring Central African side.

It means Banyana need just a point from their final game against Zambia on Saturday to advance to the semifinals‚ while a defeat and a likely win for Nigeria over the hapless Equatorial Guinea would leave the trio on six points.

As the Confederation of African Football (Caf) use the head-to-head results to separate teams‚ it would mean a mini-league is created using only results between Banyana‚ Nigeria and Zambia‚ which would then go down to goal-difference.

Going into the weekend‚ in that scenario Nigeria would be on +3‚ Banyana +1 and Zambia -4‚ meaning the latter would need to not only win‚ but do so by three clear goals to advance.

It means Jane and her teammates certainly have one foot in the semifinals‚ though they are taking nothing for granted.

“We are expecting a very good game‚ a very tight one‚” Jane said.

“Looking at the history of the two teams‚ we know Zambia will not be easy to beat.

“They are still in with a chance of qualifying for the next round‚ so it is a do-or-die. We need to stay focused.”

Jane came on at half time of Wednesday’s clash and got on the scoresheet after being gifted a tap-in by the unselfish Thembi Kgatlana‚ who also scored two on the night.

“It wasn’t an easy win‚ looking at how we started the game‚ getting the two goals early on and then getting a goal against us. It gave them a chance to come back in the game and they tried to make things difficult for us‚” Jane said.

“Come the second half of the game we had to up the pace a little bit and make sure that we attack and capitalise on their mistakes to score more goals.

“The people on the bench need to come on and change the game. You cannot come in and drop the standard of the game‚ so that was the key with our substitutes. We needed to watch from the bench and see what we can bring when we come on.”

Banyana were totally dominant in the first half but gifted Equatorial Guinea a goal to keep them in the game‚ something the team will have to work on.

“Sometimes we get carried away – maybe we thought we had the game in our hands and got complacent. But the goal they scored gave us a wake-up call to stay focussed and not take things for granted‚” Jane said.

“The win gave us some confidence. Looking at the margin we won by‚ it also sends a message to the other teams. It tells them all about the way we like to play.”

Jane says teamwork has been key to the team’s success so far‚ which included a much-heralded 1-0 win over Nigeria in their pool opener.

Banyana are seeking to finish at least third in the tournament and qualify for the Fifa Women’s World Cup in France next year.

“It is very exciting and goes to show the work that is being put in‚” Jane said.

“When we try to do individual things in the team it doesn’t work out‚ but the minute we start playing for one-another … that was the case with today's game.

“The team wins‚ everybody wins‚ it doesn’t matter who scores on the day.”

Thembi Kgatlana scored twice as a rampant Banyana Banyana cruised to a 7-1 victory over Equatorial Guinea and the brink of the African Women’s ...
Sport
3 years ago