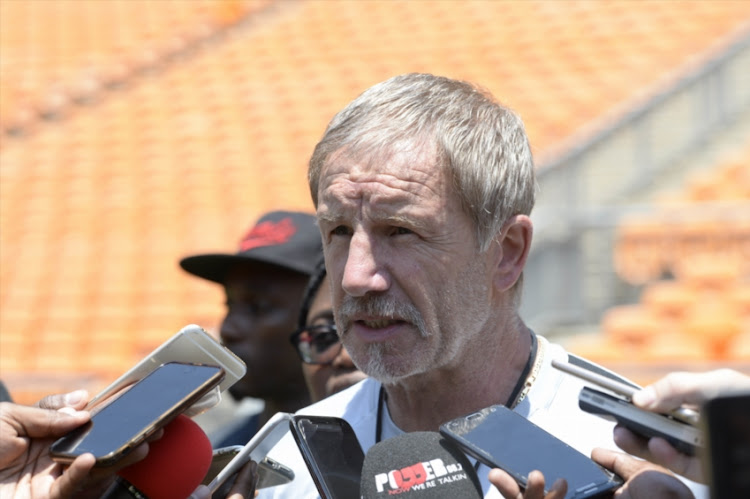 Bafana Bafana do not need financial incentives to motivate them to try to beat Nigeria in Saturday’s 2019 Africa Cup of Nations qualifier at FNB Stadium‚ coach Stuart Baxter has said.

The Super Eagles arrived in South Africa on Friday morning not just hell-bent on revenge for SA’s first competitive victory against them in Uyo in June last year (2-0) at the start of these qualifiers‚ but also having been offered big incentives to beat Bafana.

Nigeria were offered $25‚000 for every goal they score on Saturday by the governor of the country’s Delta State‚ Ifeanyi Okowa.

Baxter said for Bafana it is about qualifying for Cameroon 2019‚ not cash incentives.

“When I started playing football‚ and even now‚ money is not my god‚” the Bafana coach said ahead of his team’s final training session at FNB on Friday morning.

“It’s nice to have and it’s the reward that you feel. But I don’t feel better rewarded if someone gives me an extra million.

“The reward I get is that I see the faces out there are happy‚ and I see the players proud of themselves.

“I think the whole of South Africa is going through a tough time. There are big companies that are cutting back.

“And we also need to cut back. We can’t pay our players that sort of money.

“And I don’t think that’s a bad thing. I think that is us reflecting what’s happening in South Africa.

“Buckle your belt a bit‚ put your flak jacket on and go to war. That’s it.

“Maybe Nigeria are. I don’t know. I can only speak for the South Africans.

“Money’s not an issue with us – we want these points.”

Group E leaders Nigeria (nine points) and second-placed South Africa (eight) can each qualify for Afcon 2019 with a win on Saturday.