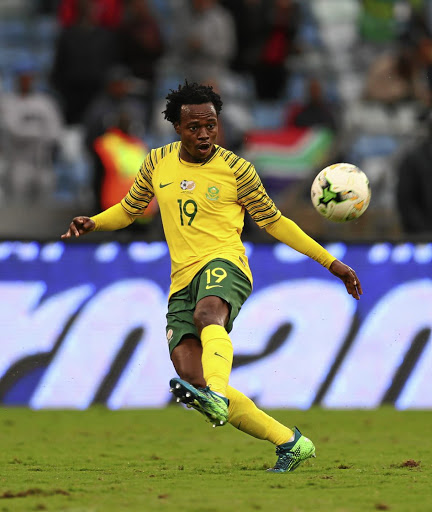 Having been one of the main orchestrators of Bafana Bafana's historic 2-0 win over Nigeria last year, the national team will again look to Percy Tau to inspire another positive result against the African giants this weekend.

When Bafana clinched their first competitive win over the Super Eagles in their opening Group E match of the 2019 Africa Cup of Nations qualifiers, Tau chipped in with a goal in a superb performance.

The Saint-Gilloise (Belgium) sharpshooter scored the second goal in the win after Tokelo Rantie had grabbed the opener.

The stakes are higher this time around as Bafana prepare to take on the West Africans at the FNB Stadium on Saturday (3pm).

Coach Stuart Baxter will be pleased to hear that his star striker is focused on securing maximum points.

"Everyone in the team has a huge responsibly to the national team and to the coach. I personally try to do my best to win all games," Tau said.

The English Football Association's plans to limit the numbers of foreign players at Premier League clubs could serve as a blow to Percy Tau and other ...
Sport
3 years ago

"Yes, we don't have some players but the players that are here share a common responsibility, which is to win against Nigeria. I am focused on doing everything we need to do and to get better."

All four players were in the starting XI and played key roles in the win over Nigeria at Akwa Ibom Stadium.

Baxter will need new heroes as Bafana seek a victory that would send them to the continental finals in Cameroon in June. Bafana are second in the group behind Nigeria, and a slip up could open the door for third-placed Libya, who play already-eliminated Seychelles this weekend.