Serero rides out storm at Bafana 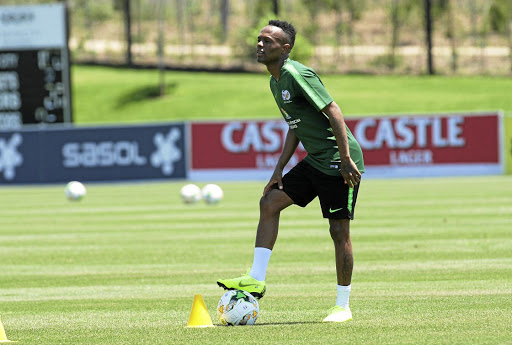 Bafana Bafana midfielder Thulani Serero appears to have had an easy return to the national team despite offending the nation just last year.

Serero, who's part of the team to play Nigeria at FNB Stadium on Saturday in a 2019 Africa Cup of Nations qualifier, refused a Bafana call-up demanding guarantees that he would feature against Senegal in a 2018 Fifa World Cup qualifier a year ago.

The 28-year-old took it easy at training yesterday at Steyn City School in Johannesburg because of an ankle strain.

Not one keen to talk to the media, he may have been relieved to be whisked away after just three minutes of engaging the scribes.

It turns out it was head coach Stuart Baxter's instruction to get Serero on the team bus, probably to save him from explaining his snub, which could complicate things for the coach.

Baxter shouldn't have worried, because Serero gave little away in his short interview. There was no apology either.

"Well, I think you can ask him [the coach] what he said to me, but the most important thing is that I'm here and I'm happy to be a part of the team. It was just a normal, simple conversation and we understood each other. I'm here," said the Vitesse midfielder.

"I think we shouldn't make this about me. The most important thing is to win on Saturday. It's not really about me. We just need to get the three points to be able to qualify for the Africa Cup [of Nations]."

Thulani Serero has been away from Bafana Bafana for just over a year and in that time the Vitesse Arnhem forward’s interviewee skills have improved ...
Sport
3 years ago

The Soweto-born playmaker said he was happy to be a part of the team again after a year out.

"It feels good being back in the country and seeing the guys, everybody in the squad.

"It was just a nice welcome. I haven't seen most of the guys in a while, so it was nice catching up," he continued. "I'm a South African and I love playing for my country. There's nothing more than that."

Serero plays as a defensive midfielder for his Dutch side and not his usual attacking role, but said he's prepared to serve the nation in whatever position he's deployed to.

"It's a different position and obviously I like to go more forward. The way we play [at Vitesse] is that we play from the back and the coach wants me to get the ball from there and make the team play."