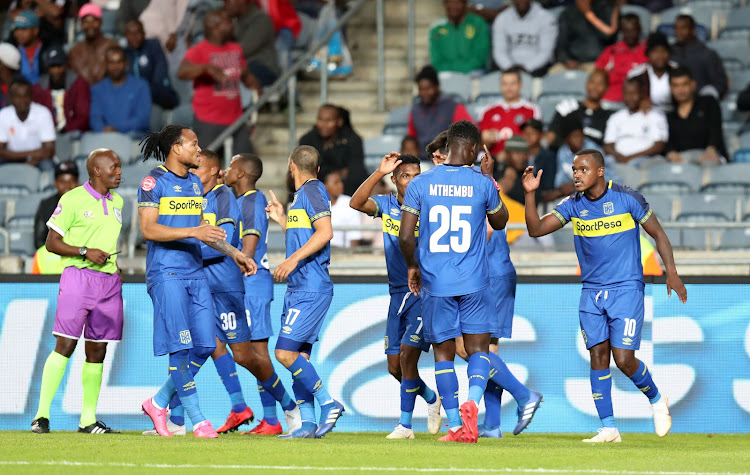 Ayanda Patosi of Cape Town City celebrates goal with teammates during the Absa Premiership match against Orlando Pirates at the Orlando Stadium in Soweto on September 19 2018.
Image: Muzi Ntombela/BackpagePix

Matsatsantsa won last year on penalties. The season before that City beat them 2-1 in the Telkom Knockout final.

SowetanLIVE has identified four key matchups that will be crucial to Saturday’s third cup final in three seasons between these two well-matched‚ equally ambitious teams.

It says something that in the middle three in SuperSport’s 4-3-3 that is so key to the team Dean Furman is almost ever-present‚ while Teboho Mokoena‚ Maphosa Modiba‚ Ghampani Lungu and even the evergreen Reneilwe Letsholonyane are rotated.

Furman is one of the ultimate midfield stoppers and harassers in the Premier Soccer League. Ayanda Patosi‚ on his day‚ is one of the slipperiest deep strikers‚ whose cleverness playing between the lines can cause havoc. Pull up the popcorn.

Perhaps the most dangerous man in front of goal on the field on Saturday will be Evans Rusike‚ who plays on the left of SuperSport’s front three. The Zimbabwean ace is the PSL’s top scorer with four goals‚ and has one more in the MTN8.

Thamsanqa Mkhize has just two Bafana Bafana cap so far‚ impressing in his last year’s 3-1 World Cup win against Burkina Faso‚ but perhaps deserves a few more. He is one of the players who makes City tick from right-back.

This contest will see either Rusike trying to pin Mkhize back from his important overlapping runs‚ and the City man having his hands full trying to wrap up SuperSport’s elusive forward.

The two teams’ box-to-box men are at the opposite ends ends of the age scale.

Letsholonyane (36) rivals even the PSL’s top-honoured player Daine Klate with eight winners’ medals‚ including two league titles (plus two MTN8‚ two Telkom Knockout and a Nedbank Cup trophy) at Kaizer Chiefs and SuperSport. Nodada (23) is just starting out and seeking his first silverware.

Letsholonyane can play like a 23-year-old‚ plus he has a galaxy of experience‚ including for Bafana at the 2010 World Cup. Nodada has all the energy in the world‚ and can conjure magic. More popcorn‚ please.

SuperSport's centre-forward Bradley Grobler is the ultimate poacher who loves feeding off the scraps in the area. City Centreback Kwanda Mngonyama has all the physical presence he needs‚ but can be slow and cumbersome on the turn.

Mngonyama will try to dominate Grobler physically. The SuperSport striker - who has three goals this season - will aim to use his mobillity and cleverness to get around the big City central defender.

Cape Town City’s goal hero Ayanda Patosi says he is not 100 percent certain of success in this Saturday’s MTN 8 final but rather “150 percent” sure ...
Sport
3 years ago

Gift Links is ready to explode against SuperSport United in the MTN8 final.
Sport
3 years ago
Next Article