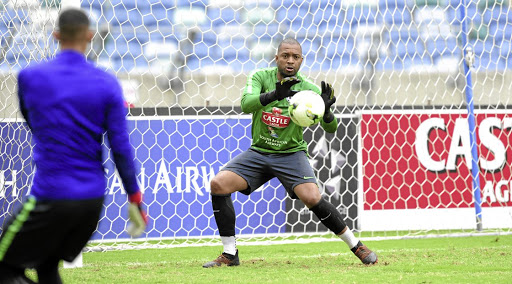 A decade after making his Bafana Bafana debut, Itumeleng Khune stands on the cusp of reaching the milestone of becoming the second-most capped national team player in SA soccer history.

The 31-year-old could move to 90 caps if he plays in the 2019 Africa Cup of Nations qualifier against Seychelles at Stade Linite this afternoon (3.30pm SA time).

Former skipper Aaron Mokoena still holds the record for most caps with 107.

Never one to miss the significance of when history is made in a Bafana jersey, Khune acknowledges he stands close to personal glory.

"I've been keeping track of my caps and number of clean sheets . I just want to continue working hard and reaching other milestones in the national team jersey," Khune said.

Bafana arrived in the Seychelles yesterday and take on the Indian Ocean islanders again in Group E following their record-setting 6-0 win at the FNB Stadium.

Khune has applauded the strikers for coming to the party after the defence had been the backbone of the team for the first two qualifiers. Bafana have not conceded a goal in three Group E matches.

"The less goals we concede the better chance of qualifying or winning matches. We always said that we close shop at the back and allow the strikers to do their job," Khune said.

Bafana are closing in on qualification with three games left in Group E. SA are top of the standings with seven points, Nigeria second with six points, while Libya are third with four points and Seychelles have no points.

Khune wants his teammates to all but guarantee their place with a win. "For us we just have to keep our feet firmly on the ground and not take anything for granted. It will be the first time for most players to go to the Seychelles.

"According to our calculations, we are four points away from qualification but we will push for all nine points [in the three remaining matches]."