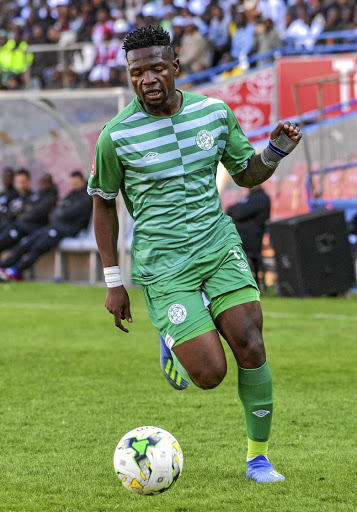 Tshegofatso Mabasa of Celtic has the coach's backing to lead the attack against Sundowns on Saturday.
Image: Frikkie Kapp/BackpagePix

Bloemfontein Celtic coach Steve Komphela believes Tshegofatso Mabasa is one of the best strikers in the country and is challenging him to work harder on his mental strength.

Having endured an unfruitful campaign last season, where he failed to register a single goal in 12 league matches, Mabasa has enjoyed a promising start to this season under the stewardship of Komphela, and has already netted three goals in eight PSL matches.

"I think he's one of the best strikers we have in SA. He only needs to be stronger mentally. Talent, he's got. technical ability, yes, it's there. He knows how to get into spaces that can provide him goals. We are working on him to make sure he's even better," Komphela said.

"One thing that I picked up - there's a goal [opportunity] that he missed against Free State Stars [when they lost 2-0 a fortnight ago]. After missing that ball, he dropped. At this level you have to forget the mistakes and look at what you can do next.

"So, he needs to get to a certain level of mental strength where, as a striker, you would miss but move on."

Mabasa's only two goals last season came in the Telkom Knockout quarterfinal against Platinum Stars and in the semifinal against SuperSport United, before they eventually
lost to Bidvest Wits in the final.

The 2017 MultiChoice Diski Challenge top scorer is expected to lead Phunya Sele Sele's attack when they travel to Lucas Moripe Stadium to face Mamelodi Sundowns in the first round of the Telkom KO on Saturday (6pm).

"The PSL is unbelievably competitive. Sundowns, we acknowledge their quality. But again, we have to look at positives because we want to be in the final again this year. Not only go there, but try win it when possible," noted Komphela.