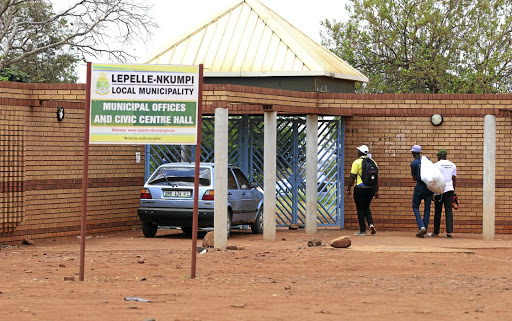 The offices of a Limpopo municipality remained closed yesterday after angry residents stormed the premises demanding the resignation of officials who had invested public funds in VBS Mutual Bank.

Community members ejected employees of Lepelle-Nkumpi local municipality in Lebowakgomo on Monday and allegedly threatened to assault them if they reported for duty.

An employee, who asked to remain anonymous for fear of reprisals, said the group told them they would be back and did not want to find anyone at work.

"They came in here on Monday and demanded that we go home. They said they wanted those who invested money in VBS Mutual Bank to resign immediately," he said.

"We fear for our lives."

The municipality had invested R155.5m in the bank.

When Sowetan visited the municipal offices yesterday, employees were sitting outside and people looking for services were turned away. Police were patrolling the area.

DA councillor Fanie Tsela said the group had demanded the suspension of the mayor and municipal manager.

"Now, ordinary people are suffering. They can't get services because of the invested money," he said.

Municipality spokesperson Khali Maphoso confirmed that protesters were angry over the investment in VBS.

"They want the mayor to resign due to the investment but we told them that there are investigations under way in this regard," he said.

A forensic report detailed how close to R2bn was apparently looted from VBS, with the bank's executives said to be among the main beneficiaries.

Meanwhile, Fetakgomo-Tubatse local municipality in Burgersfort announced on Monday that it would not be able to pay its employees by the end of November due to the loss of its investment in VBS.

However, it did a U-turn yesterday.

Spokesperson Thabiso Mokwena said: "We are experiencing financial challenges at the moment and we have scaled down on some of the major projects.

"However, we will be able to pay our employees and deliver services that are outlined in the integrated development programme."

The municipality had invested R245m of public funds in VBS.

Ramaphosa: I did not fail to take action over VBS saga

President Cyril Ramaphosa has denied that he failed to take action in the VBS Mutual Bank saga.
News
3 years ago

Spare a thought for VBS victims

The Great Bank Heist, as the VBS looting has come to be known, directly hit the pockets of the poor the most.
Opinion
3 years ago