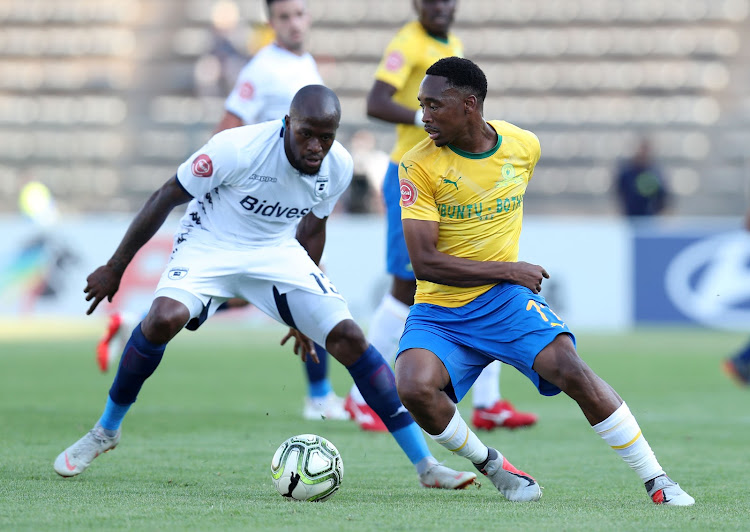 Sibusiso Vilakazi of Mamelodi Sundowns is challenged by Sifiso Hlanti of Bidvest Wits during the Absa Premiership match at Lucas Moripe Stadium in Atteridgeville, west of Pretoria, on October 7, 2018.
Image: Muzi Ntombela/BackpagePix

Sibusiso Vilakazi will not play again this season in a major blow to Mamelodi Sundowns after he had surgery on his Achilles tendon at the weekend.

Sundowns officials confirmed to SowetanLIVE that Vilakazi is out for the rest the premiership campaign after he was injured in a practice match with Bafana Bafana last week.

The 28-year-old attacker faces a lengthy spell of rehabilitation to get back into shape at a vital stage of his career and will also miss out on an entire Caf Champions League campaign.

Vilakazi collapsed on the field as the national team held a scrimmage with SuperSport United last Wednesday.

He has since gone under the knife on the operating table and pictures posted on social media show him in good spirits.

But the injury comes as a blow to coach Pitso Mosimane‚ due to arrive home on Tuesday after a spying mission in Morocco.

Vilakazi‚ chosen as the best player in the Premier Soccer League four years ago now‚ has been one of his regulars and is seen as a vital cog in the Sundowns’ attack.

The Brazilians have a tough schedule ahead with their immediate objective in the Telkom Knockout‚ followed by the Champions League‚ the Nedbank Cup and the league where Sundowns are defending their title – all in the next seven months.

Sundowns' next game is in the first round of the cup against Bloemfontein Celtic in Atteridgeville on Saturday.

Get rid of me, I'm a problem - Mosimane

Mamelodi Sundowns coach Pitso Mosimane was irritated that his striker Toni Silva insisted he was OK to play last weekend in the key Premier League ...
Sport
3 years ago
Next Article