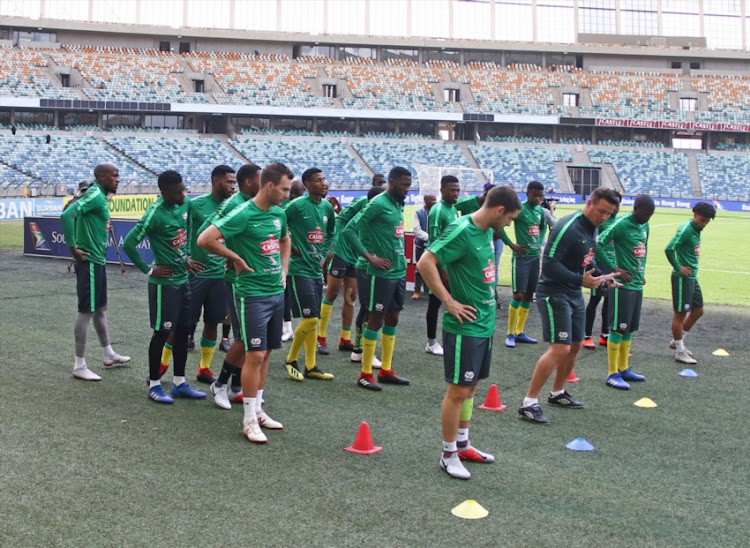 The crucial Afcon qualifier between Bafana Bafana and Seychelles at FNB Stadium on October 13 is in danger of public television blackout as the SABC and Safa are yet to agree on a broadcast deal for that match.

A last-minute deal was struck between the SABC and Safa earlier this month to televise the Afcon qualifier between Bafana and Libya at Moses Mabhida Stadium in Durban‚ and it remains to be seen if the parties will find come to an agreement again this time around.

The contract between Safa and the SABC has expired and a new deal is yet to be agreed upon.

At the centre of the dispute is an amount believed to be in the region of R50-million that the football body is claiming that the public broadcaster still owes them from the previous agreement.

“From a Safa point of view‚ we have nothing more to say regarding this issue. We have left it in the hands of the SABC‚” Safa communications manager Dominic Chimhavi said.

SABC chief operating officer Chris Maroleng said the broadcaster are engaging Safa‚ but could not give a guarantee on whether the match would be televised.

“As to whether the next Bafana Bafana match will be televised‚ let’s just see how our discussions go‚” Maroleng said.

“We are currently engaging Safa about the rights and ultimately when we have concluded the discussions we will come to the public and jointly make the announcement.”

The public broadcaster also does not have the rights to televise Springbok matches.

Maroleng admitted it would benefit millions of South Africans to have senior national rugby team matches televised on SABC.

“At this stage‚ we have not been allowed [to show Springboks matches] because of the agreement that the rugby federation has with its broadcast partners‚ who are not the SABC.

“We would love to take the Springboks live for the people of South Africa because it would be amazing. We would like to partner with the South African Rugby Union (Saru)‚ but at the moment there is nothing because the rights have been acquired by another company.”

On Tuesday the SABC and Cricket South Africa announced their broadcast partnership regarding the T20 League later in the year‚ and Maroleng said this will help in growing the sport in the country.

“We are a public broadcaster and all we are interested in is giving our audience‚ who in the main are the disadvantaged people of South Africa‚ the opportunity to watch the best sports without paying a lot of money‚” the COO said.

“So our strategy is to focus on enhancing the audience value and we are also interested in developing awareness of all the sporting codes. Cricket South Africa came to us and said let’s have a partnership so that more South Africans can enjoy and understand the game of cricket.

“Imagine a young kid in the rural area somewhere in the country watching the matches on television deciding to take a bat and start playing cricket. It is not about domination but offering the people of South Africa who love sport the opportunity.”