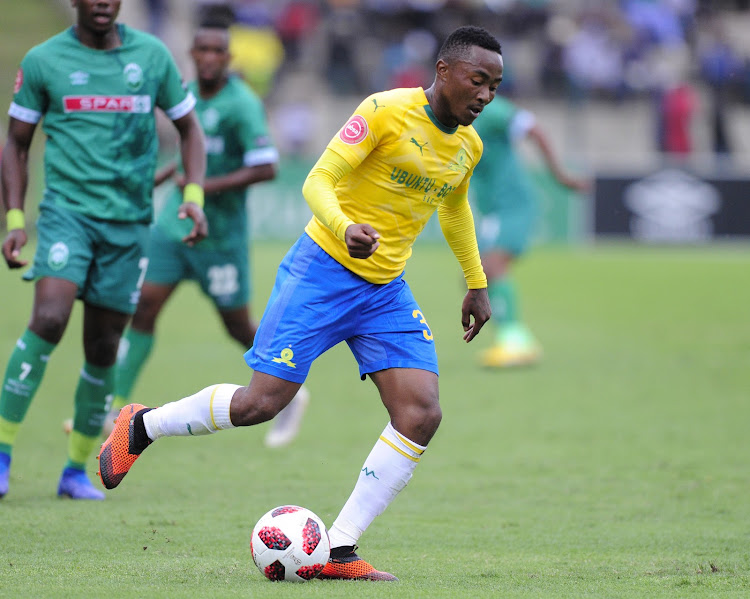 Lebohang Maboe of Mamelodi Sundowns in action during the Absa Premiership match against AmaZulu at King Zwelentini Stadium in Umlazi on September 15 2018.
Image: Gerhard Duraan/BackpagePix

Maboe junior‚ though‚ knows the trophies will also come for him now that he has joined star-studded Mamelodi Sundowns from Maritzburg United.

It has been a highly promising start for Maboe since his move to Chloorkop.

He already has his first goal in Sundowns colours and has played half their league games (three out of six) and three more in the MTN8.

Dad Sidwell played for Bloemfontein Celtic‚ then won trophies at Pirates before moving to AmaZulu.

Maboe feels no pressure to emulate his father’s medal cabinet and career.

“Nah‚ not even. No‚ I’m running my own race‚ you know‚” Maboe responded this week as Downs prepared for Wednesday night’s Absa Premiership matchup against Lamontville Golden Arrows at Princess Magogo Stadium (kickoff 7.30pm).

“What my father did was for him. And now I’m writing a history of my own.”

Maboe was the Nedbank Cup’s Player of the Tournament last season‚ although Maritzburg fell at the final hurdle‚ losing 1-0 against Free State Stars in the final in Cape Town.

The impressive playmaker‚ who has already earned a smattering of caps for Bafana Bafana‚ believes the wait will not be long for silverware at Pitso Mosimane’s trophy machine Sundowns.

“We just have to keep working hard. We know that it’s not going to come easy.

“Any team that plays against us comes to us guns blazing. So we just have to work hard to put our ‘A’ game every time we get a chance to express our talent.”

Players who have moved from Maritzburg to Sundowns recently – such as Rheece Evans‚ Mario Booysen and Cuthbert Malajila – have struggled for game time.

Maboe has had a more promising start‚ and‚ confident in his ability‚ believes he will become a Downs regular.

“I feel it comes down to one’s mentality. If you’re willing to work hard‚ when you eventually get the chance you just need to use the opportunity that you’re going to get‚” he said.

Downs have had a slow start in the PSL‚ and are languishing in ninth place with one win and three draws from four matches.

Arrows are in 11th with a win‚ two draws and two defeats in five games.

A Durban man says he is pressing ahead with a case of assault against Mamelodi Sundowns coach Pitso Mosimane.
Sport
3 years ago

Mamelodi Sundowns will need to do themselves a favour by keeping the drama strictly on the pitch.
Sport
3 years ago
Next Article