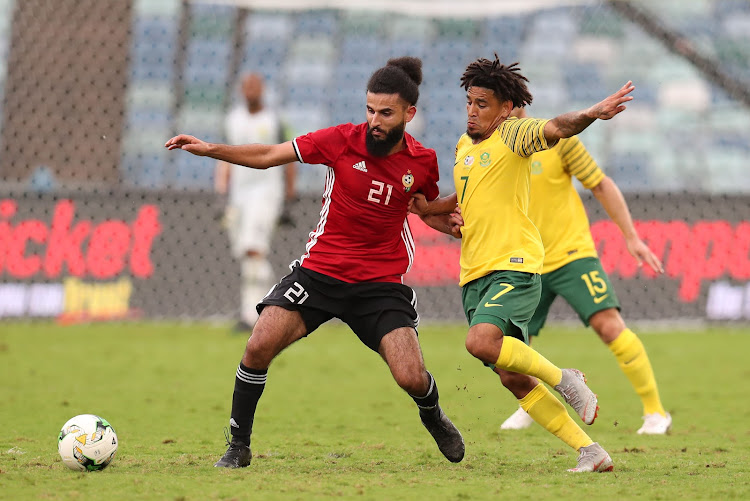 Rabia Ramadan Alsshadi of Libya challenged by Keagan Dolly of South Africa during the 2019 African Cup Of Nations Qualifier match between South Africa and Libya at the Moses Mabhida Stadium, Durban on 08 September 2018.
Image: ©Muzi Ntombela/BackpagePix

Keagan Dolly is set to be out for some months after sustaining a fracture in his leg‚ a blow for Bafana Bafana coach Stuart Baxter as he prepares for the must-win African Nations Championship qualifiers against Seychelles next month.

Dolly was injured early on in Saturday’s 1-1 draw for his French club Montpellier with Strasbourg and while there were initial fears the leg was broken‚ it turns out the injury is less severe.

Lebo Mothiba‚ who missed Bafana’s 0-0 draw with Libya earlier this month through injury‚ netted his first goal for new club Strasbourg when he came off the bench to power home a header in the dying minutes against Montpellier.

Siphiwe Tshabalala endured a nightmare first start for new Turkish side Erzurumspor after he was substituted before halftime in the 2-2 draw at Sivasspor.

The former Kaizer Chiefs man was off the pace of the game and failed to impress‚ leading to his early exit.

Kurt Abrahams continued his fine scoring form in the Belgian second-tier when he netted for the third game running as Westerlo beat Lommel 4-1. Abrahams has recently moved from top-flight Sint Truiden.

Percy Tau played for his Belgian side Royale Union St Gilloise as they won 2-0 at home to Roeselare‚ and set up the second goal for his team with an assist.

Lebogang Phiri returned to the starting line-up for his struggling French Ligue 1 side Guingamp‚ but they were humbled 4-0 at Marseille in a night to forget‚ while Lars Veldwijk netted a second goal of the season for Dutch second-tier side Sparta Rotterdam in a 2-0 win over FD Deb Bosch.

Dino Ndlovu still can’t stop scoring in the Chinese second-tier as he banged in two more goals for Zhejiang Greentown as they drew 2-2 with Beijing BG. He now has 15 goals in 17 starts for his side.

Former BidVest Wits midfielder Keaghan Jacobs continued his good start to the new Scottish Premier League season as he helped his Livingston side to a 1-0 win over Hamilton.