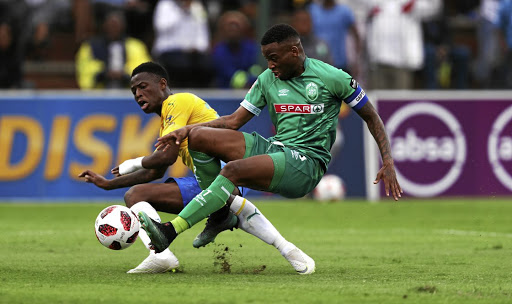 Sibusiso Vilakazi's 86th minute strike earned Mamelodi Sundowns a hard-fought point to deny AmaZulu their third win of the campaign in an enthralling 3-3 stalemate at King Zwelithini Stadium on Sunday.

It was an inspiring start for AmaZulu, taking the lead as early as the fifth minute after Zimbabwean attacker Butholezwe Ncube dispossessed overconfident Andile Jali and unleashed a 24-yard effort, beating debutant Reyaad Pieterse. Soon after conceding, Sundowns stepped up the gear and began to play more offensive, but AmaZulu central defensive pairing of Tapelo Nyongo and captain Mbongeni Gumede managed to contain menacing Toni Silva and Phakamani Mahlambi.

The threat by Mahlambi and Co early in the first half proved a wake-up call for Usuthu as they came close to doubling their lead in the 25th minute, when a free kick from Jabulani Ncobeni resulted in a goal-mouth scramble inside the Sundowns box which saw Nyongo pounce on the loose ball, but was denied from six-yards out after an unbelievable save from Pieterse.

On the half-hour mark, the visitors equalised when Mahlambi latched onto a great long ball from Hlompho Kekana inside the box. The 21-year-old ex-Bidvest Wits and Al Ahly attacker had seen his initial shot saved by Moeneeb Josephs, before quickly following up to tap home from close range to level matters.

This exhilarating encounter went into the halftime break with the scoreline locked at
1-1. It took a few seconds in the second period for the Brazilians to take the lead when Silva dribbled his way past young left-back Sibusiso Mabiliso to slot home.

However, the Brazilians' lead was short-lived. The home side found the equaliser three minutes later as Ncobeni's strike brought AmaZulu back into the game.

Just when Bonginkosi Ntuli had thought he had given AmaZulu the victory with his 73rd minute strike, substitute Vilakazi broke the hearts of Usuthu when he made it 3-3 with four minutes remaining of regulation time.

Downs remain in Durban to play Golden Arrows at Princess Magogo on Wednesday while AmaZulu travel to FNB for a date with Kaizer Chiefs on Saturday.