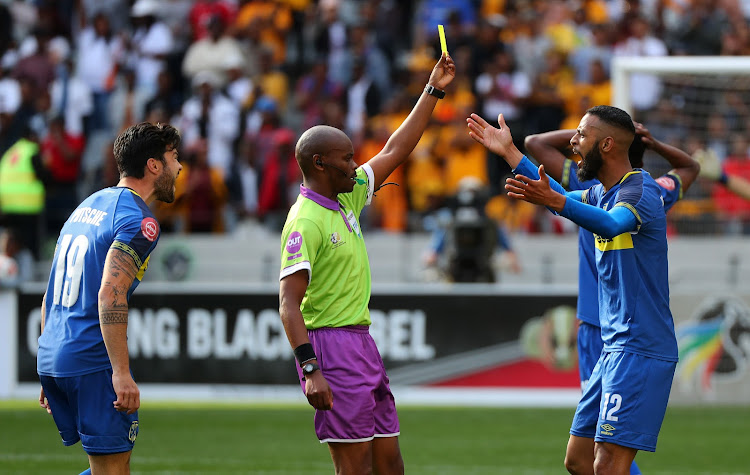 Cape Town City coach Benni McCarthy felt his side were hard-done let down by the match officials in Saturday’s 4-1 home defeat to Kaizer Chiefs‚ but also admitted his side had fallen short with their own play.

The performance of referee Thando Ndzandzeka drew the ire of McCarthy after he sent off defender Taariq Fielies and gave a number of soft free-kicks to the visitors.

“It is just another in the on-going dilemma … they all look nice by the way with their OUTsurance kit.

“But that was the best thing about the performance out there‚ the beautiful green and purple kit‚” a rueful McCarthy said.

“I don’t want that to overshadow the fact that we came short and lost.

“But the manner we lost … for a coach it is frustrating when you are up against 11 men who wanted to overturn their bad run and then they got a little bit of help from the man in the middle.”

City had fallen behind to an early goal from Siyabonga Ngezana‚ but were level at halftime when Matthew Rusike netted against his former side.

Chiefs took the lead again early in the second period though as Khama Billiat netted from a quick counter-attack after the Amakhosi had been awarded a free-kick.

“They hit us with a counter-attack‚ it was a nice assist from the referee‚” he said.

“I tried to see where it was a foul‚ our player winning the ball fair and square and he gives them a free kick and they score from there.”

But for all his frustration with the officiating‚ McCarthy also admitted that his team were not at the level he would expect and suggested perhaps that the 35‚000 strong crowd‚ the vast majority supporting Chiefs‚ had played a role.

“We started slow‚ I am not sure the reasons behind that‚” he said.

“We prepared nicely for it [the game]. They did exactly what we expected them to do‚ press us high‚ stop us from playing and letting us play the long ball.

“But we looked like a team that was star-struck … the crowd affected us‚ because it is not every day we have played in front of such a massive crowd. The players weren’t themselves.

“We made Chiefs look like they were world-beaters. But when they scored we seemed to settle and started playing like we were supposed to start the game.

“It was one of those days that didn’t go for us‚ but we take it and learn from it‚ learn what to do next time in that situation. If we do go a man down … I still thought we could have got something there.

“But Chiefs took their opportunities and well done to them.”

City are next in action on Wednesday when they travel to Orlando Pirates.