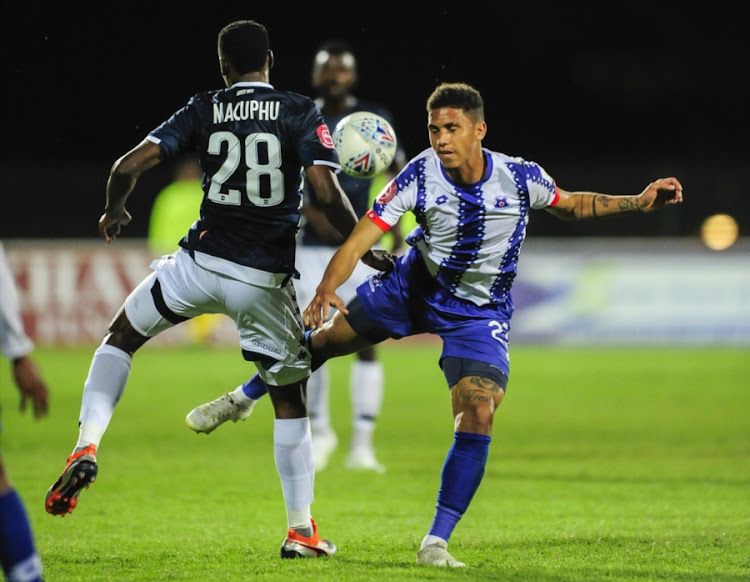 Bidvest Wits extended their lead at the top of the Absa Premiership table to three points after a goalless draw against Maritzburg United, who remain rooted at the bottom and winless after four matches.

It was certainly not a performance that will satisfy the hard to please Gavin Hunt but the Wits coach will take the point away from home, which takes his team to 13 points after six matches.

Wits failed to create any clear-cut goal-scoring opportunities throughout the first half at Harry Gwala Stadium in Pietermaritzburg and struggled to get the ball to their target man Mxolisi Macuphu, who was well marked.

Maritzburg, who are yet to win a match in five games in all competitions, started brightly with Koketso Makgalwa and Yannick Zakri asking tough questions of the Wits back four, which had three Bafana Bafana regulars in captain Hlatswhayo, Sfiso Hlanti and Buhle Mkhwanazi

Makgalwa, on loan from Mamelodi Sundowns, was a constant thorn in the Wits defence and combined well with Zakri and the midfield pairing of Fortune Makaringe and Bandile Shandu.

Barring a Makgalwa free-kick that drew a diving save from the Wits goalkeeper Darren Keet and a Rushine De Reuck shot that was cleared off the line, it was a dull first half.

Both sides played their last match 16 days ago owing to the Fifa break and the effects of rustiness were evident.

Maritzburg were again first to get out of the blocks in the second half with some enterprising football but were unable to breach the Wits defence.

Substitute Deolin Mekoa came on for De Reuck and he wasted no time getting involved as he tested Keet with a powerful long-range drive.

Minutes later Wits created their first real chance of the match after striker Macuphu’s headed attempt was narrowly tipped over the crossbar by Ghanaian keeper Richard Ofori in the Maritzburg goal.

Hunt introduced Simon Murray for Terrence Dzvukamanja with half an hour remaining and the Scottish striker got stuck in immediately as he carved out a couple of good chances for himself.

Murray was joined by Gift Motupa from the substitute’s bench as Hunt went for firepower upfront and it worked to some extent as the visitors bombarded the home side’s goal, but it was not enough as Maritzburg held on for dear life.

Of great concern for Maritzburg coach Fadlu Davids will be fact that his team is firing blanks.

The Team of Choice have yet to score in front of their home fans and their only point before this one came in a goalless home draw against Kaizer Chiefs on August 17.

For Wits, the draw was their first of the season after winning four of their opening five matches to take ownership of top spot.

Maritzburg have been poor every time Wits came to town. The KZN team have claimed just one win and suffered four defeats from their 11 home league matches against the 2016 PSL champions.

Wits will be back in action Friday when they welcome Polokwane City at Bidvest Stadium looking to cement their top spot. Maritzburg will travel to in-form, second- placed Bloemfontein Celtic two days later.

Maritzburg United have suffered a setback ahead of their crucial Absa Premiership match at home against log leaders Bidvest Wits in Pitermaritzburg ...
Sport
3 years ago

Maritzburg United's Belgian striker Andrea Fileccia has told of his desire to play for Bafana Bafana once he qualifies for South African citizenship ...
Sport
3 years ago
Next Article