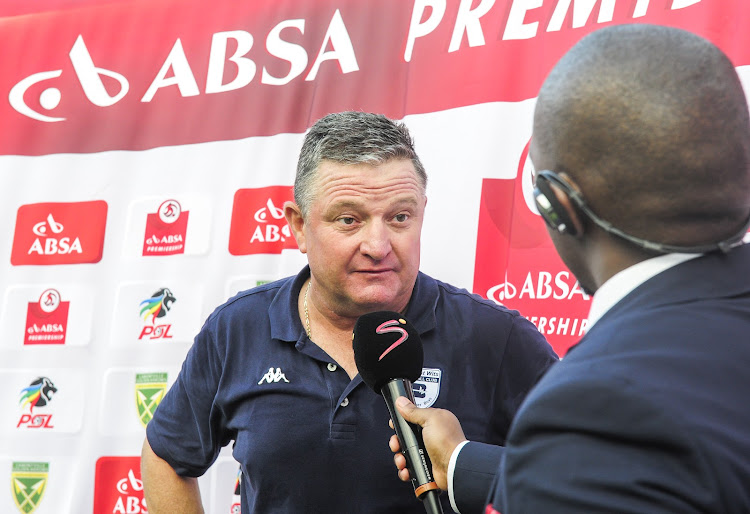 Although Bidvest Wits coach Gavin Hunt is encouraged by the understanding developing between his two main strikers – Gift Motupa and Mxolisi Macuphu – he still feels the duo can do a lot more to get more goals in coming matches.

The new striking partnership at the Clever Boys has scored four goals in five league matches‚ making Hunt’s team the most lethal so far as they have banged in 10 goals in total and only conceded two.

These goals have helped Wits to be also perched at the top of the Absa Premiership table after winning four and losing one match.

Both Macuphu and Motupa were among the goals on Wednesday night when Wits registered their second 3-0 victory of the season at the Bidvest Stadium‚ this time beating AmaZulu. Simon Murray also got his first goal for the Clever Boys towards the end of the match after coming in for Macuphu.

“Er… yes and no. I’m not [entirely] happy with it‚ but maybe somebody is‚” is how the Wits coach responded when asked about the Macuphu-Motupa partnership.

“Both of them scored tonight which is a good sign. They’ve scored a few now. But they need to do better.

“In the first half there were times when they over-hit the ball or under-hit the pass. You’ve got to be better in those areas because at times you never gonna get those chances against a lot of teams. So you are always going to look for improvement.”

Macuphu‚ Motupa and the dynamic left winger Deon Hotto have contributed six of the 10 goals Wits have scored‚ which justifies why Hunt went for their signatures at the start of the current campaign.

“We have only played five games but you can see [with new players] that there’s new legs and energy in the team‚” said Hunt.

“We didn’t have this last season. We are going to see where we finish after 30 games but there’s a still a long way to go.”

What was more pleasing for Hunt was the fact that Wits didn’t take long to recover from their 1-0 home loss to SuperSport United in the match that ended their 100% start to the season.

“The most important thing was to bounce back from that defeat. We had a little more energy tonight and we could have wrapped things up in the first half‚ but we didn’t‚” Hunt said.

“All credit to AmaZulu. They came at us and kept attacking but I thought we were good in keeping them at bay.

“We were good at times in counterattacking but we didn’t keep the ball long enough at times. But all in all we would have taken this result even before the game had started.”

Although it is still far too early to talk about the title challenge‚ Hunt feels that if Wits can keep their current form and continue grinding out results they may well remain among the serious contenders for the title.

“If you do that [winning four out of five] every five games you’ll be fine‚ you know what I mean. But it’s a long way to go.

“This start has given us a little bit of momentum‚ but as I said it’s a two-and-a-half week break [for the MTN8 semfinals and a Fifa international date] again now. When you have got such a long break you never know what you are going do with it.”