Wits cruise past AmaZulu to stretch their lead 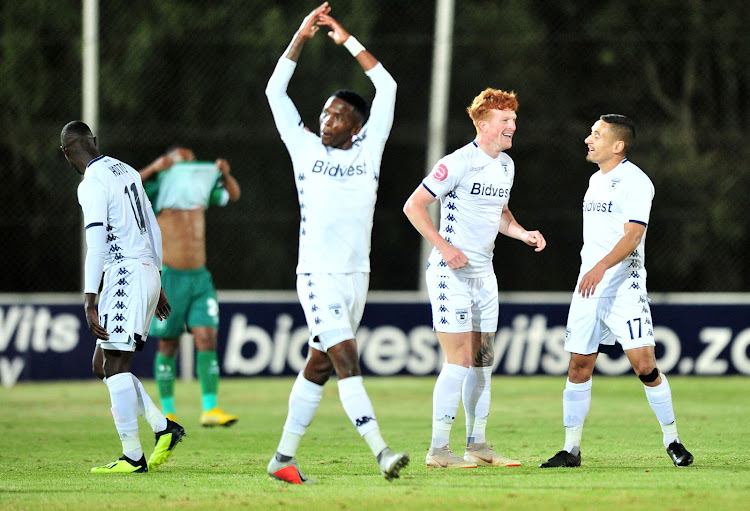 Gift Motupa and Mxolisi Macuphu underlined the devastating striking partnership they are developing at Bidvest Wits when they scored a goal each in the first half of this match, helping their team to maintain their position at the summit of the Absa Premiership table after beating AmaZulu 3-0 at the Bidvest Stadium on Wednesday night.

Motupa scored his second goal of the season three minutes into the game, heading in Thabang Monare’s corner kick.

Wits had caught AmaZulu napping with a quick counter which ended with a shot by Hashim Domingo deflecting for a corner.

Motupa, whose telepathic understanding with Macuphu is set to trouble many defences this season, opened his account in Wits outstanding 3-1 victory against Kaizer Chiefs in their second match of the season last month.

Macuphu got his third goal of the season courtesy of an amazing run by Daniel Hotto who beat a number of AmaZulu players in the middle of the park before supplying an equally good assist to Macuphu to beat former Wits keeper Moeneeb Josephs with a clever low shot two minutes before the half hour mark.

Protests for an offside on Macuphu’s goal  from AmaZulu coach Cavin Johnson fell on deaf ears as referee Phillip Tinyani pointed to the centre line.

Substitute Simon Murray scored his first ever goal for the home side in the 74rd minute to wrap up what was Wits second 3-0 victory this season after doing the same here against Free State State in their opening match of the season.

The match was marked by the good understanding between Wits attacking players when going forward, particularly Motupa and Macuphu linking up well with Hotto on the left and Domingo on the right flank.

Johnson’s team took too long to get into the rhythm of the game, their first shot on goal coming in the 35th minute when Mabhuti Khenyeza’s low drive was blocked by Darren Keet in Wits goals. The opportunity came through Usuthu’s overlapping left back Sbusiso Mabiliso who had supplied a sublime low cross to Khenyeza.

AmaZulu should have halved the score in the 51st minute when Siyethemba Sithebe found himself with only Keet to beat but failed to clinically pick the spot, his tame low shot hitting the upright.

Wits were guilty of taking their foot of the pedal and sitting back at the start of the second period giving Amazulu more time and space on the ball. The visitors failed, though, to use all the possession they were given.

Clearly intending to keep and protect the lead, Wits coach Gavin Hunt introduced defensive midfielder Denis Weidlich in the space of Motupa in the 64th minute having already pulled out Macuphu for striker Murray a few minutes before that move.

These changes should have inspired Usuthu to press more but instead it was the Clever Boys who regained the control of the match with Murray proving a nuisance to the visitors defence before opening his account, pouncing on a loose ball after Josephs failed to deal with a long range shot.