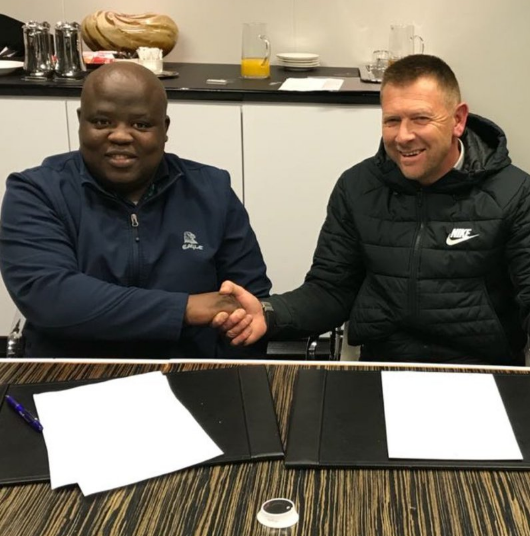 Eric Tinkler makes a return to Premier Soccer League (PSL) coaching having entered the rapidly revolving door at Chippa United‚ hopeful of recapturing the magic of his season at Cape Town City.

The former Bafana Bafana midfielder replaces Dan Malesela‚ sacked for the third time as Chippa coach‚ who lasted just three games of the season‚ which garnered a draw and two defeats.

Tinkler has enjoyed mixed success in South Africa’s top-flight‚ ending an 18-month spell at Orlando Pirates without a trophy‚ before leading Cape Town City to an unlikely third-place finish and the Telkom Knockout.

That led to an ill-fated move to SuperSport United‚ where‚ despite winning the MTN8 and reaching the Caf Confederation Cup final‚ Tinkler walked away from the job after just nine months as Matsatsantsa’s form plummeted.

But Tinkler’s very first spell in the hot-seat in the dugout was in the 2006-07 season when he led Bidvest Wits for eight games after the axing of Boebie Solomons.

It was not a particularly successful time‚ with Tinkler claiming a win and a draw‚ but losing the other six matches. His old friend Roger de Sa returned to the club for the following season and Tinkler acted as his assistant over the next five years before the former was let go in favour of the Spaniard Antonio Lopez Habas.

Tinkler stayed on for a few months but was then lured to Pirates when De Sa was‚ surprisingly to some‚ given the reins of the Soweto giants.

When De Sa left in early 2014‚ Tinkler was tasked with bridging the gap between that exit and the arrival of Vladimir Vermezovic and was again in charge for eight matches.

This time he won three‚ lost three and drew two‚ but showed enough application in that time to impress the bosses.

And so when Vermezovic left Pirates in December of that year‚ Tinkler spent the next 18 months in charge of the side‚ all the time under the title of caretaker-coach.

He led the side to the final of the 2015 Confederation Cup and the 2016 Nedbank Cup‚ where they lost on both occasions.

The side finished fourth in the league at the end of the 2014-15 season and seventh in 2015-16‚ which led to his release and the appointment of Muhsin Ertugral instead. He managed the club in 83 matches in all‚ winning 39‚ drawing 22 and losing 22.

Ironically‚ Ertugral was the first choice for the Cape Town City job ahead of the formation of the new club‚ but when he was not available‚ Tinkler took it instead.

It would be a super fit as he excelled in the role‚ taking a squad that had not played together before at the start of the season and getting them to perform‚ reviving the careers of the likes of Lebogang Manyama‚ Aubrey Ngoma and Robyn Johannes.

But he made the decision to move to SuperSport after one campaign‚ promised a bigger budget and with perhaps more opportunity to win silverware.

He claimed the MTN8 title almost immediately‚ ironically beating City in the final on penalties‚ but lost in the decider of the Confederation Cup against Democratic Republic of Congo.

After that he could not get the team to click in and in March he left‚ suggesting he had gotten all he could out of the group of players he had.

He was linked to a number of teams after that‚ including Club Africain in Tunisia‚ but is now back in the PSL with a Chippa side that has had a squad overhaul and needs someone to knit them together.