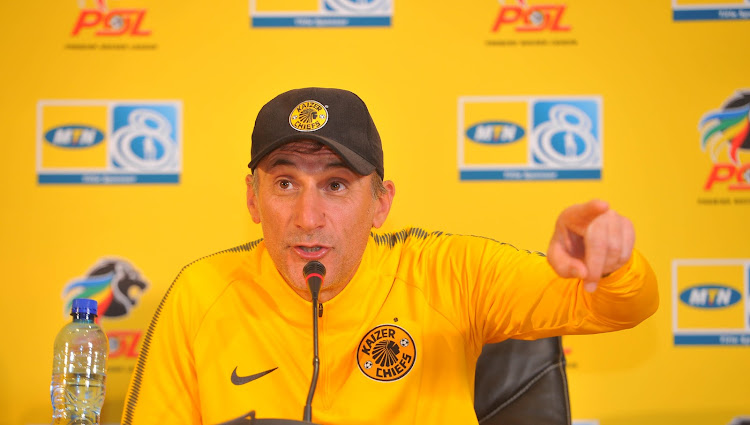 Kaizer Chiefs coach Giovanni Solinas speaks to the media during the MTN8 press conference at the PSL offices in Parktown on Thursday August 23 2018.
Image: Sydney Mahlangu/BackpagePix

Kaizer Chiefs coach Giovanni Solinas says Kaitano Tembo’s tactical astuteness as a coach has been visible so far in for SuperSport United in the 2018-19 season.

Solinas said that SuperSport had looked organised and intelligently laid out as Amakhosi prepared to face Matsatsantsa in Sunday’s first leg of their MTN8 semifinal tie.

Somewhat clumsily‚ Chiefs’ coach‚ who battles through his English‚ paid his SuperSport counterpart the dubious compliment that Tembo “is not stupid”.

Solinas said that Sunday will be a whole new game for Chiefs following a stuttering start to the season‚ where his team have managed just won win – 3-0 in the MNT8 quarterfinals against Free State Stars – from five league and cup games.

Chiefs have drawn their last two matches‚ both away in the league‚ 1-1 against Baroka FC and then 0-0 against Maritzburg United.

“You cannot compare this with the last game‚ and say that‚ because Chiefs drew the last game away and now we play away again‚ I won’t be confident‚” Solinas said.

“No‚ I am confident. You can’t compare the game against Baroka or the Maritzburg game with SuperSport.

“SuperSport is a new game‚ a new history. So the start [to the season] doesn’t count. Now it’s a new game and we prepare to enter into this game.

“We know that it is difficult because we play against SuperSport. They are a very important team in South Africa.

“They have very good players‚ the coach is good. The SuperSport coach is not stupid.

“I know he’s a good coach with a good strategy. They used it well against Wits‚ AmaZulu and Pirates.

“They are strong‚ good preparation‚ tactically very good. So for me it’s a difficult game. Because also my colleague [Tembo] is very good.

“In the PSL there are no easy games. Every game is tough. Every game needs concentration and a good preparation.”

SuperSport have had a more promising start than Chiefs‚ losing just one game in four.

United's last three results have been a 1-0 home league win against AmaZulu‚ away penalties victory against SuperSport in the MTN8 quarters and away 1-0 win against Bidvest Wits in the league on the weekend.

Solinas has said that Chiefs’ new signings made this week of forward Lebogang Manyama and centreback Mario Booysen have nor been considered for the game-day squad as both lack match fitness.