United on back foot after Chiefs' draw 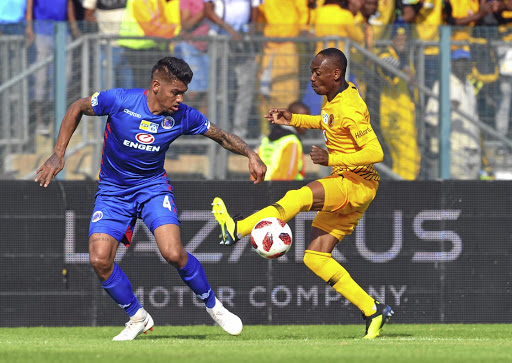 It's advantage for Kaizer Chiefs with two away goals following their 2-2 draw against home side SuperSport United in their MTN8 semifinals first leg here yesterday.

Bradley Grobler netted a brace for Matsatsantsa and Amakhosi replied with goals from Khama Billiat and Leonardo Castro.

Chiefs will host the second leg at FNB Stadium on Saturday night.

On paper, SuperSport held the advantage with two wins in three previous MTN8 clashes against Chiefs, who came into the game with one win against the Tshwane side in the Wafa Wafa competition.

However, after just 19 minutes, Chiefs threw the history books out the window and took the lead through Billiat after some hard work from Dumisani Zuma, who laid on a cross for the Zimbabwean to fire home from close range.

Chiefs' joy, however, was short-lived as Grobler found the equaliser when he turned his man and fired the ball past Itumeleng Khune in the 24th minute.

Before Chiefs could recover, SuperSport midfielder Dean Furman's attempt came off the crossbar. Khune could do nothing when his defenders fell asleep and allowed Grobler to get in between them and fire into the top corner, giving the hosts the lead.

Chiefs went to the break with their heads down as they were trailing, but they were a different side on their return and were rewarded with Billiat and Castro combining, with the latter beating an offside trap to lob Ronwen Williams just a couple of minutes into the second half.

With Bafana Bafana coach Stuart Baxter in attendance and finalising his squad to play Libya in Durban on September 8, the local players were eager to impress.

Khune, SA's number one, might again be the first name on Baxter's list, which will be announced in Johannesburg on Tuesday.

Khune denied Grobler his hat-trick through a fine save with about 13 minutes remaining.

That save would prove crucial as Chiefs manage to hang on for a draw.