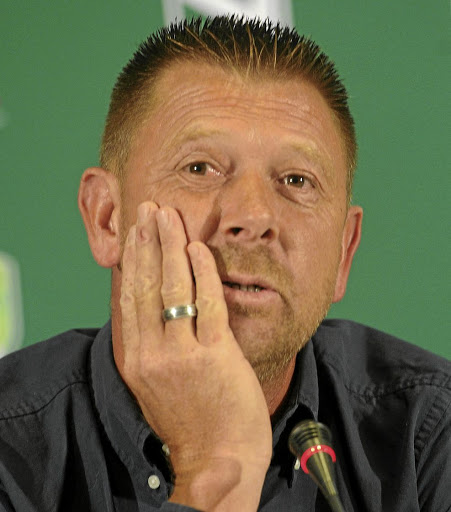 Eric Tinkler starts his new job on the bench at Chippa United next Wednesday up against the team he last coached and where a player putsch effectively ended an all-too brief stint.

SuperSport United is an ironic first destination for the 48-year-old former African Nations Cup winner as he takes over at Chippa and returns to coaching for the first time since March.

Tinkler was drummed out by player power‚ quitting on the back of a dressing room revolt after months of strained relations between himself and senior players.

A terse statement announcing his departure suggested a behind-the-scenes Machiavellian atmosphere but in no ways painted the real picture of intrigue‚ personality clashes and the toxic relationship between Tinkler and a cabal of players he called “Baxter’s boys”.

It came against the back drop of potential relegation for a club whose resources should make them potential title challengers.

Indeed‚ they won three back-to-back league titles under Gavin Hunt from 2008 to 2010 and have kept amassing cup trophies since‚ with Tinkler starting with MTN8 success and then a place in the African Confederation Cup final.

But it all unraveled with SuperSport sitting just three points above the relegation zone with only six wins in 23 league matches under Tinkler.

The resignation statement‚ eight months after Tinkler doubled his salary by moving from Cape Town City‚ read: “I have been in discussion with club management about the poor performance of the team for a while now.

“In reflecting on the last few games‚ I have not been satisfied with the response out on the pitch. I believe we can turn things around but the only way of getting out of our current position is to have a fully unified and committed response from the players and I haven’t been able to get that from them‚ so it seems best for all parties that we part ways.”

But in effect it was dressing room revolt led by senior players that forced him out.

They did not gel with the coach and had been embittered by several clashes‚ not least a dressing down that Tinkler gave them even after they beat Ajax Cape Town 3-0 away in February.

The result was a breakdown in the relationship between senior players and Tinkler that kept up the spiral of poor results.

Tinkler‚ who has been tipped as a future Bafana Bafana coach and is renowned for his hard work‚ will surely have learnt from the episode in terms of handling players.

The SuperSport spell blotted his copy book but he still has a good reputation among club owners for his tactical acumen and intense preparation.

Tinkler was in charge of 37 matches in all for SuperSport‚ winning only 10‚ drawing 17 to go with 10 defeats.