Stars players living in the past: Eymael 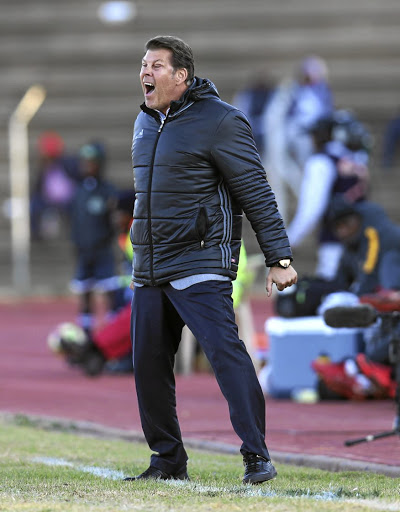 Free State Stars players still have their heads in the clouds and must be brought down to earth. That is the view of their coach, Luc Eymael.

Ea Lla Koto were knocked out of the MTN8 at the quarterfinal stage after a 3-0 defeat by Kaizer Chiefs at FNB Stadium at the weekend.

Stars look a shadow of the team that impressed last season by finishing sixth in the league and winning the Nedbank Cup in May.

This season they have already lost 3-0 to Bidvest Wits in their opening league encounter before beating Maritzburg United 2-1 at home in midweek, before the heavy loss to Chiefs in the WafaWafa tournament.

Eymael believes some of his players are living in the past and that has affected their game. He urged them "to forget about the cup that we won [last season]", during his post- match press conference at FNB Stadium.

"I think some guys are still in the sky and thinking about that [cup triumph]. I think if you are a real competitor, you start all the time at zero and fight at every training [session] and every game to show your potential. If you are not doing that, you will not improve and you'll not reach the level that you did before," he said.

Eymael continued: "To achieve something that we did last season, a team like Free State Stars, is very difficult and to maintain the level, the standard, is 10 times more difficult."

Stars have let in seven goals in their three matches this season, but only scored twice and will have to play as a unit when they face AmaZulu at King Zwelithini Stadium on Sunday.