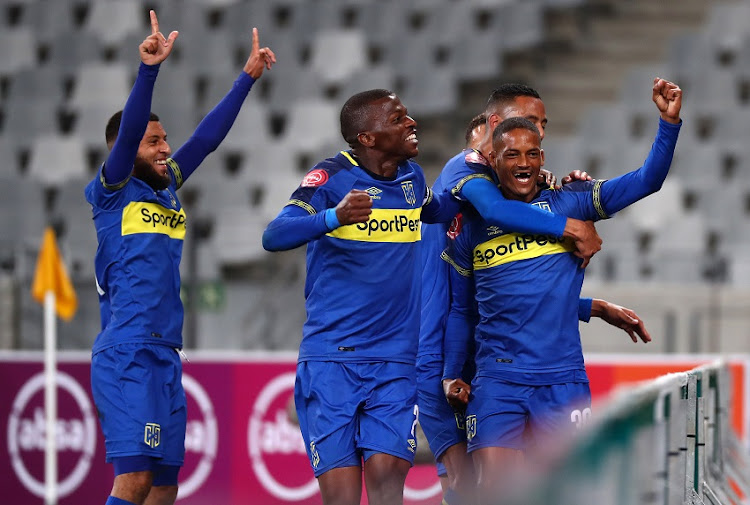 A cracking half volley from Roland Putsche and a second goal from birth day boy Craig Martin ensured a winning start to Benni McCarthy’s second season as a coach as Cape Town City beat SuperSport United 2-0 on the opening day of the new Absa Premiership season on Saturday evening.

It took until 10 minutes into the second half to break the deadlock but the goal, when it did arrive, was a sumptuous shot from an angle at the back post, hit with venom and just the right way to get the campaign underway.

It came from a mazy run down the left by Bradley Ralani and a cross to the back post where Putsche was unmarked and had time to set his sights before unleashing a super effort.

Some 12 minutes it was Thabo Nodada’s mazy run into the SuperSport area that set up the second as he got a cross in that substitute Matthew Rusike slid goal wards.

That initial effort was saved by SuperSport United goalkeeper Ronwen Williams but Rusike flipped the rebound wide for Martin to slot away with ease.

“We want to dominate at home, we want to play good football and I’m glad it has happened like this,” said Putsche afterwards.

City had four new players in their starting line-up, including tall Dutch goalkeeper Peter Leeuwenburg whose work permit only arrived on Friday, while there was a familiar look to the SuperSport United selection by coach Kaitano Tembo, whose position as head coach was only confirmed 24 hours before kick-off when he was handed a two-year contract.

SuperSport ‘s intentions also clear from early on as they allowed City the run of the ball and then looked to catch their hosts on the counter.

Bradley Grobler, back after six months on the sidelines following knee surgery, looked hungry to get things going but when the counter attacks did come, SuperSport’s forwards were repeatedly caught offside, thereby missing out on the opportunity.

For City there was plenty of time to show their potential on the ball with Teko Modise running things in the middle but most of the impact coming out wide on the left hand side, where Ralani and Edmilson were able to get plenty of balls across to the middle.

But they could not find new striker Siphelele Mthembu to finish. Instead the only work that Williams had the first half was to save two long range efforts from Riyaad Norodien, another new signing in McCarthy’s selection.

SuperSport might have had a late penalty appeal when James Keane was brought down by Edmilson but referee Kulsande Qonqgo was behind play.

Had that been awarded SuperSport could have pulled one back and made for a difficult last 10 minutes for City, but in the end McCarthy’s side were worthy winners.