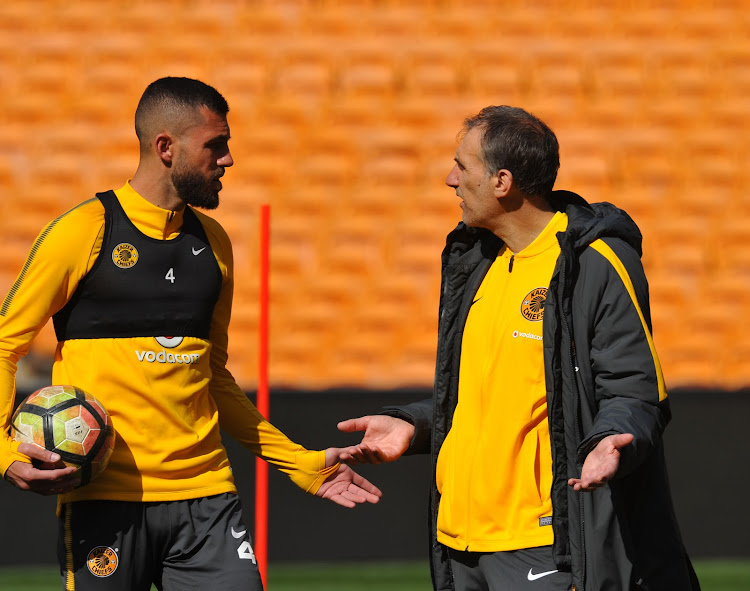 Kaizer Chiefs head coach Giovanni Solinas and defender Daniel Cardoso in a discussion during the club's media day at their training base in Naturena, south of Johannesburg, at FNB Stadium on July 20 2018.
Image: Sydney Mahlangu/BackpagePix

Kaizer Chiefs remain unsure if they will have Italian coach Giovanni Solinas on the bench for Saturday’s high-profile Absa Premiership opener against Mamelodi Sundowns but maintain his absence from the dug-out has not been disruptive to their pre-season plans.

Solinas has yet to receive his permit that would allow him to officially start work as Chiefs coach‚ but the club are hopeful that he will get the required documentation by the weekend.

Outside of their Soweto Derby clashes with Orlando Pirates‚ the meeting against the defending league champions is the biggest of the season for Chiefs‚ but their inability to sew-up a new coach until weeks before the start of the new campaign has left them in an administrative pickle.

“It is not about being confident [of having Solinas on the bench]‚ it is just a matter of allowing the process to take its course‚” a guarded Chiefs corporate communications manager Vina Maphosa told SowetanLIVE.

Mamelodi Sundowns star on trial at top Swedish side Djurgardens

Mamelodi Sundowns striker Bongi Ntuli is on trial at top Swedish side Djurgardens as he looks to seal a short-term loan move to Europe.
Sport
3 years ago

“We are optimistic of course‚ but we understand that we have to allow the process to unfold.

Former coach Steve Komphela resigned in April‚ yet as Chiefs prepare for the start of the campaign‚ their long search for a new tactician means that three-and-a-half months later there is the potential they will not have their head coach on the bench for what is a crunch season opener that could set the tone for the campaign.

The club maintained they were seeking the right candidate‚ but were rebuffed a number of times before settling on former Free State Stars tactician Solinas.

Assistant coach Patrick Mabedi has been leading the team in pre-season with sideline input from Solinas in recent weeks.

But defeats to Sundowns and Cape Town City in the last week have left fans underwhelmed ahead of the new campaign.

Maphosa would not be drawn on whether this was a disruptive influence to their planning for the next campaign‚ except to say that they were satisfied with the work that had been put in.

“We don’t reveal to the media how we prepare the team during the off-season‚ whether it was Mabedi or somebody else involved‚” Maphosa said.

“Pre-season is our own internal backyard activity that we keep to ourselves.

“As this week unfolds and we get closer to the game on Saturday‚ there will be an opportunity to speak about how we are preparing for the Sundowns match.

"But we cannot talk about pre-season as a whole.”