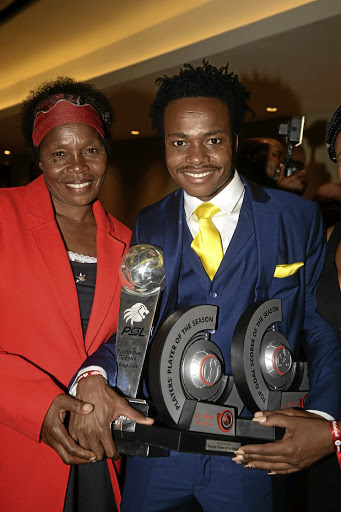 Of her six sons, Elizabeth Tau never expected her fourth - Percy - to become the best footballer in the country and change the family's lives forever.

Elizabeth was there to witness her son steal the show at the PSL awards dinner in Sandton on Tuesday, where Tau scooped the PSL Footballer of the Season and Player's Player of the Season after a stunning season with Mamelodi Sundowns.

"Percy was a good boy growing up. He never bothered me. He liked to do things quietly, to this day that is his character," she said emotionally.

"He would just say 'mama don't worry, I'll take care of you'.

"He was in love with football. Whenever he lost against the other boys he would run back home because he didn't like to be on the losing side.

"It was later in life that his talent became apparent. He was about 15 and was one of the best players in the neighbourhood," she said.

The 63-year-old mother and her family lived in Groblersdal, Limpopo, before settling in Witbank in 1998.

Life was hard for the former domestic worker as she raised six sons (Tumi, Dumisani, Mogau, Percy, Milton and Bradley) and two daughters (Promise and Ingrid).

"To be honest, it was not easy. Whatever little I got from my employers I used it to take care of my kids," she added.

"Now Percy is taking care of us. He bought me a very big house and every day when I wake up I cannot believe it, considering where we come from."

English Premier League side have joined a long list of suitors that are bidding for South African Footballer of the Year Percy Tau‚ his Mamelodi ...
Sport
3 years ago

Percy clearly adores his mother and had to compose himself when asked about what she meant to him.

"I am going to get emotional now. I was raised solely by my mom.

"She is very proud, even though she is not a football fan. She cares more about my education," the Bafana Bafana ace said.

Elizabeth became teary-eyed when she reflected on the death of her third son Mogau Tshehla, who passed away in a car accident in February.

Tshehla, who was a defender for Polokwane City, used his sister's marital surname because their mom's ID had been misplaced when he went to register at Home Affairs.

"My kids were really affected by the loss of their sibling. Percy wanted to dedicate his awards to his brother to whom he was close because they both played in the PSL."

She said Percy told her he was going to join a club overseas.

"I gave him my blessings. I don't know the name of the team, but wherever he goes, I told him I will come visit.

"I will be flying for the first time soon. I have never been in a plane," said the proud mom.