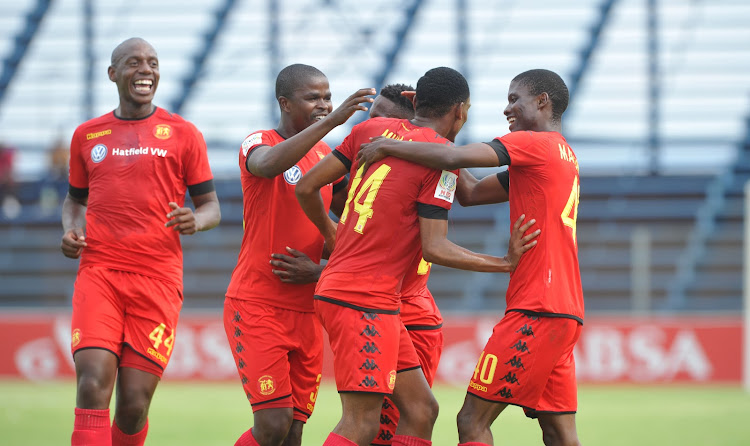 Newly promoted Highlands Park have opted to start their pre-season training at least a fortnight before the next club in order to be ready for their return to the Premier Soccer League top-flight.

The National First Division champions are going back to work next Monday.

“We have to start earlier than the other PSL teams because we have lots of catching up to do and we obviously don’t have the advantage they have in terms of experience.

“The more preparation we can get in to ensure we are properly ready‚ so much the better for us‚” said chairman Larry Brookstone and assistant coach Allan Freese.

Both were in Polokwane this week scouting players at the COSAFA Cup.

The club plan several signings to strengthen their squad for the new season‚ which starts in August.

Highlands have bitter memories of their previous campaign when they went up for the 2016-17 season after winning the promotion-relegation play-offs.

They had a few weeks to rest and then prepare for their inaugural top-flight campaign and they were already on the backfoot by the time the league get going in earnest.

Highlands went on to to finish last with just five win in their 30 league matches.

But they came storming back after initially losing three of their opening five games in the NFD.

Owen da Gama then took over as coach and they did not lose again in the league‚ romping to the title.

Most PSL clubs will start their pre-season training between June 18 and 25.

The Premier Soccer League awards will be handed out on Tuesday night‚ honouring those players‚ coaches and match officials who excelled in the ...
Sport
3 years ago

A heaving Thohoyandou Stadium roared Black Leopards back into the Premier Soccer League for the first time in a half-decade with the Limpopo team's ...
Sport
3 years ago

Siphesihle Ndlovu has credited his Maritzburg United coach Fadlu Davids with his nomination for the Premier Soccer League Footballer of the Season ...
Sport
3 years ago

Bloemfontein Celtic say reports that the club has already been sold to a Kimberley businessman are “untruthful and misleading”‚ according to a ...
Sport
3 years ago
Next Article