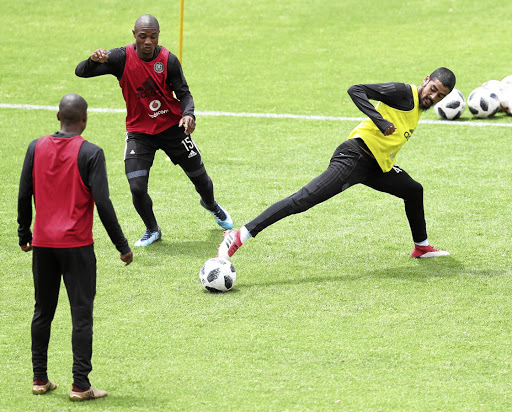 Pirates players are hard at work ahead of the Soweto derby on Saturday.
Image: Muzi Ntombela/BackpagePix

Orlando Pirates supporters will be shocked to discover they have Steve Komphela to thank for bringing the good old days of the "Happy People" back.

This after their erudite assistant coach Rulani Mokwena revealed that the Kaizer Chiefs mentor was one of the confidants who encouraged him to join Bucs on leaving Mamelodi Sundowns.

"I had other job offers as well to be head coach in the PSL. The decision to come to Pirates was hugely influenced by him," Mokwena said of the Chiefs coach.

"The people you meet can set you up for success or failure. Possibly one of the most important role players in my career as a coach was coach Steve."

Mokwena also expressed that Komphela had in the past tried to recruit him to be his second in command but circumstances did not allow.

"While I was at Sundowns I would get job offers from him to assist. He almost went to Chippa and he gave me a call to come and assist, but at the time I was already deeply entrenched at Sundowns."

The bond between the two dates back more than a decade ago when they were at Platinum Stars.

It was Komphela who gave Mokwena his first job as a deputy coach when the young technician was working with the junior teams at Dikwena.

The apple has clearly not fallen far from the tree as Mokwena not only shares a passion for coaching with Komphela, but they are both gifted with gab reflexes.

The pair will put their relationship to the side when the Buccaneers come against Chiefs in the Soweto Derby at the FNB Stadium on Saturday (3.30pm).

Mokwena says the derby clash will be similar to when he was at Sundowns and faced his uncle Jomo Sono - the coach of Jomo Cosmos.

"I have been in these situations before. When I was at Sundowns we played Jomo Cosmos, a team that is extremely close to my heart," he continued.

"What matters at the end of the day is the result; we will go out to win the match. For us the focus is on getting three points."