Kolbe injury a golden opportunity for young players to step in

Fractured jaw keeps Springbok winger out of All Blacks games 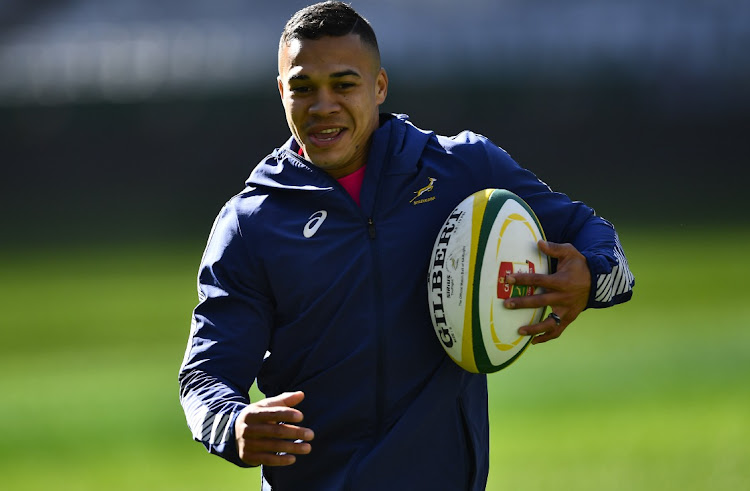 Former Springbok international Lwazi Mvovo says the absence of Cheslin Kolbe for the two Tests against the All Blacks presents the chance for a youngster to experience Test rugby.

Kolbe is set to be out of the Bok team until September, after he  fractured his jaw during the last Test match against Wales in Cape Town last month.

The dynamic winger is an integral part of the Springbok team, helping them win to the Rugby Championship, Rugby World Cup and the British & Irish Lions series in recent years.

There’s no doubting that the Springboks are weaker without Kolbe. The Toulon winger has skill sets that make him valuable both in attack and defence. He’s an X-factor player, able to create or score a try from nothing. He’s good at taking down aerial balls and never shies away from a tackle.

His injury could present a chance for veteran Willie le Roux or the fast Kurt-Lee Arendse to deputise on the wing, according to Mvovo.

“When you lose a player with that much experience, it is a bit of a problem but there is cover and players that have shown they can play at Test level,” said Mvovo.

“There’s Willie, he’s played on the wing and Arendse, even though he does not have much experience but he’s shown that he can play international rugby. It’s always important to try out new combinations, you give people experience.

“They can get to understand the level of Test rugby. When things like the injury to Kolbe happen, you can call players who are exposed to the level.

"I think it’s the right time to introduce new players and youngsters so they can be used to that level,” said the 17-cap Bok.

Springbok head coach Jacques Nienaber will announce the team that will take on the All Blacks on Saturday at the Mbombela Stadium. Looking forward to the game, Mvovo has warned the Boks to not read too much into New Zealand’s recent series loss to Ireland.

“We’ve seen the All Blacks get beat by Ireland but when they play South Africa, it’s a different ball game,” he said.

“We can’t judge them from their game with Ireland. Whenever the All Blacks come to SA, sparks fly.”

The Springbok Sevens were in firm control of their Commonwealth Games quarterfinal on Saturday evening as they beat Canada 33-0 to advance into the ...
Sport
2 weeks ago

Blitzboks through to the Commonwealth quarterfinals

The Springbok Sevens team have qualified for the Commonwealth Games quarterfinals after they beat Tonga (36-5) and Malaysia (46-0) in their two Pool ...
Sport
2 weeks ago

Orie's move back home pays off

Returning to his home base of Cape Town has helped Stormers lock Marvin Orie establish himself as a prominent figure in the Springbok set-up.
Sport
2 weeks ago
Next Article