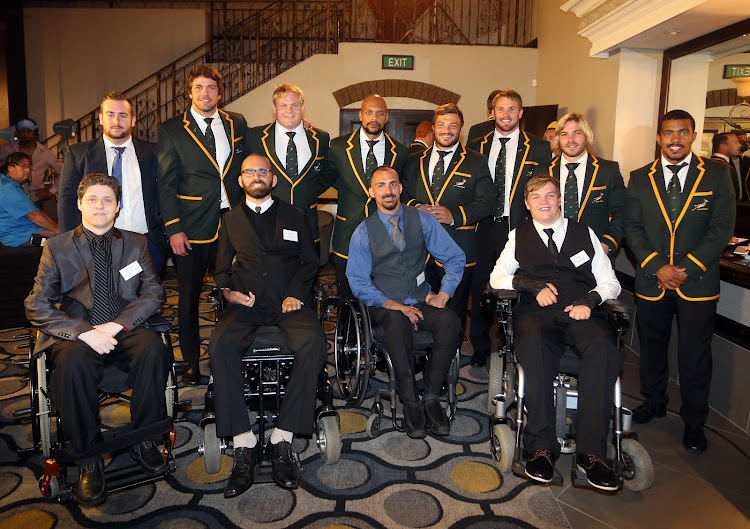 A file photo of a group of Springbok players posing for a picture with the Player Fund recipients during the 2016 Chris Burger/Petro Jackson Banquet at Montecasino in the north of Johannesburg in 2016.
Image: Carl Fourie/Gallo Images

The Chris Burger/Petro Jackson Players Fund‚ hurting from the effects of lockdown‚ is appealing for donations as its 40th anniversary approaches.

“Currently fundraising for all charities has been hugely affected as a result of the pandemic‚” said the fund’s general manager‚ Gail Baerecke.

“We are no exception as a result of no rugby being played‚ where much of our funding is generated. Corporate donors are also having to weather their own storm.”

The fund has attempted novel fund-raising efforts‚ like Zoom meetings with top players and former stars.

“What hasn’t change for us during this time‚ is the support that our recipients have needed from us‚ be it monthly subsistence for those who are needy‚ replacement and or repairs to their mobility equipment‚ or transport to and from vital clinic and hospital appointments‚” said Baerecke. “Our costs have also escalated during this time as a result of our recipients household economic situations having been impacted.”

Monday (August 31) marks the 40th anniversary of the death of Chris Burger‚ who suffered a broken neck in a Currie Cup match in Bloemfontein the previous day.

The fullback’s Western Province captain‚ eighthman Morne du Plessis‚ was at the forefront of kickstarting the fund on September 9 that so far has helped more than 500 injured players‚ at a cost of more than R50-million.

One of Du Plessis’ goals was to maintain the memory of Burger‚ who had also been a teammate of his at the Villagers rugby club.

Burger was a talented player with a rare versatility that saw him play fullback‚ wing‚ centre and flyhalf for WP since he was noticed as a prodigy at the Police club in 1974.

Burger‚ one of six children‚ grew up on the Middelpos farm outside Clanwilliam‚ playing with catties‚ enjoying sport and learning to play six musical instruments‚ including piano‚ guitar and accordion.

He also inherited his father’s carpentry skills and a cupboard he built now stands in the classroom where his daughter‚ Esmaré Burger Wells‚ teaches.

Apart from rugby Burger excelled at athletics‚ especially in the 100m and 200m sprints and long jump‚ winning the Victor Ludorum at the Clanwilliam high school.

After school he went to the police college in Pretoria and was later stationed in Cape Town‚ but the work didn’t sit well with him.

“My grandmother said he was too soft for that‚ the police force affected him emotionally because he was a very soft guy‚” said his daughter.

“He loved people and he was a peaceful man.”

Burger left the force and became an agent at the Epping market‚ often arriving at Villagers practices with fruit for coach HO De Villiers.

In his spare time he gave tennis lessons and taught at his church’s Sunday school. He also singlehandedly built a swimming pool at the house he shared with wife Riana‚ unable to afford to have one put in.

But he took the game seriously. For all his talent‚ he was unable to cement a permanent spot in the WP team‚ always stuck on the fringes.