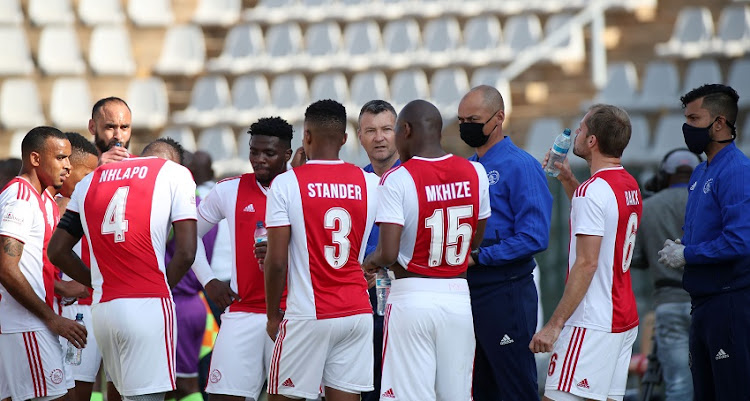 Ajax Cape Town have to take risks in front of goal‚ coach Calvin Marlin said after a his goal-shy team’s run of poor form has seen them spurn a nine-point lead to go into Sunday’s final round of the GladAfrica Championship at a disadvantage in second place.

Ajax have won two and lost three of their five games in the bio-bubble‚ picking up six points out of a possible 15 to see a nine-point lead whittled down to where a 2-1 defeat against JDR Stars on Thursday allowed hungry Swallows FC to draw level on 53 points.

Ajax meet 13th-placed‚ relegation-threatened Mbombela United at Rand Stadium on Sunday. Swallows are up against Tshakhuma Tsha Madzivhandila‚ who are assured of third place and the playoffs‚ at Makhulong Stadium.

The narrowest of margins of a single goal separates the two – with Swallows top from a +11 difference to Ajax’s +10.

This means if both teams win‚ the scorelines will be crucial to who becomes champion for automatic promotion to the Premiership. If both lose or draw‚ Swallows win.

Marlin admitted Ajax were distressingly flat losing against Stars for a team chasing a promotion championship.

“I’ve looked at the stats and in the last 10 matches we’ve only scored nine goals. I said to them‚ ‘It’s not enough’‚” he said.

“We’ve only conceded eight in those 10‚ which compared to the beginning of the season‚ when we were letting in too many‚ is quite good. But when we closed the back we closed the front as well somehow.

“ ... We said to the players‚ ‘The next game‚ we’ve got to go out and just attack this team. Attack them 100 percent. Play without any fear. Go and score goals’.

“I mean‚ nothing can go wrong if you’re taking the risks up-front to score goals. Rather take a risk in scoring than being fearful‚ and not getting in the right positions.

“And that’s what we’ve been saying in training week-in and week out‚ is ‘Get used to the idea of putting yourselves in front of goal and imagine you are scoring’.”

At the bottom‚ Royal Eagles on 20 points‚ are relegated. TS Galaxy (33 points)‚ Mbombela (32)‚ Jomo Cosmos (30) and TS Sporting (29) are in line for the second-last place to join Eagles in the ABC Motsepe League third-tier.