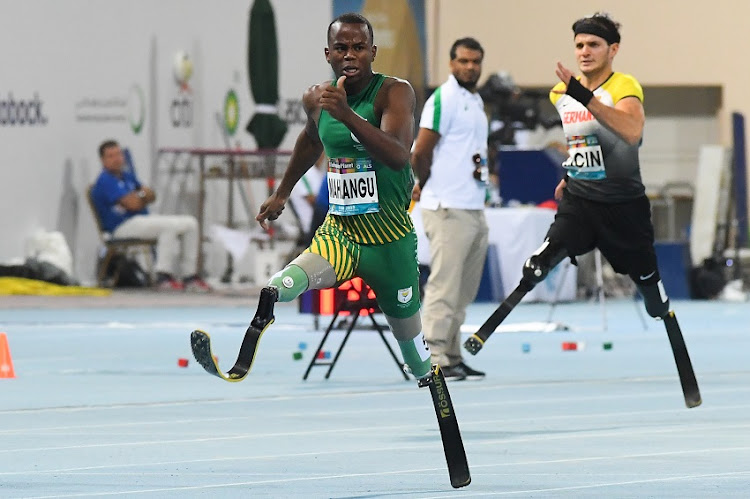 Ntando Mahlangu of South Africa competes in the Women's 200m T61 Final on day eight of the World Para Athletics Championships at the Dubai Club for People with Determination on November 14, 2019 in Dubai, United Arab Emirates.
Image: Moto Yoshimura/Getty Images

SA could field its smallest Paralympic team since 1992‚ but they’re brimming with star power like‚ schoolkids Ntando Mahlangu and Simoné Kruger‚ as well as more experienced contenders such as Anrune Weyers and Charl du Toit.

If the wheelchair basketball team fails to qualify for the Tokyo 2020 showpiece‚ which will run after the Olympics from August 25 to September 6‚ the total squad size will number less than the anticipated 51.

Grade 11 pupil Mahlangu‚ the 200m world champion‚ could be one of SA’s best bets for a gold medal in Japan‚ but he played down expectations at a six-months-to-go function at the SA Sports Confederation and Olympic Committee (Sascoc) headquarters in Johannesburg on Tuesday.

Dressed in his school uniform — he left after three periods in the morning — Mahlangu‚ the silver medallist at Rio 2016‚ said he believed he would be in the mix.

“I believe in myself‚ but don’t want to give everyone high hopes. Anyone in that final can win gold.

“I’m looking forward to Japan. After watching the [Rugby] World Cup and seeing that atmosphere‚ I’m excited about experiencing that.”

The 15-year-old‚ who suffered a stroke before birth‚ is aiming for victory. “We’re going for gold‚” added the world-record holder of 33.92m in the cerebral palsy F37 category.

The only problem is she will have to compete against F38 category‚ where last year’s world champion came from.

Para-cyclist Pieter du Preez‚ an actuarial analyst‚ is also competing in a mixed category in the time trial.

A former triathlete who competed for SA at the under-23 world championships‚ broke his neck when he was knocked off his bicycle by a motor car in 2003.

Determined to stay in sport‚ he took up wheelchair rugby while still in rehab. “Since 2014 I have never come back from a world championships or World Cup without a medal‚” said the four-time world champion.

Du Preez missed the chance to compete in Rio‚ but he’s eager to make up for that in Tokyo.

Blonde Weyers‚ an ex-teacher who is focusing full-time on athletes‚ is the 400m world champion‚ although she also landed silver in the 200m and a 100m bronze.

She was born with a severely under-developed left hand and wrist‚ with four small knobs for fingers.

Having been subjected to much bullying at junior school in Kempton Park‚ she discovered her latent talent after taking up cross-country. Her confidence started to blossom and these days she likes to motivate children.

When Weyers runs she wears a prosthesis to assist with balance.

“But I’m basing everything around the 400m‚” added the Stellenbosch Masters in Education student‚ who has cerebral palsy.

He hopes to research the positive role sport can play to motivate children.

SA’s greatest Paralympic performance came at Beijing 2008‚ when they finished sixth on the medals table with 30 medals‚ 21 of them gold.

Their lowest haul was eight medals‚ four gold‚ in 1992.