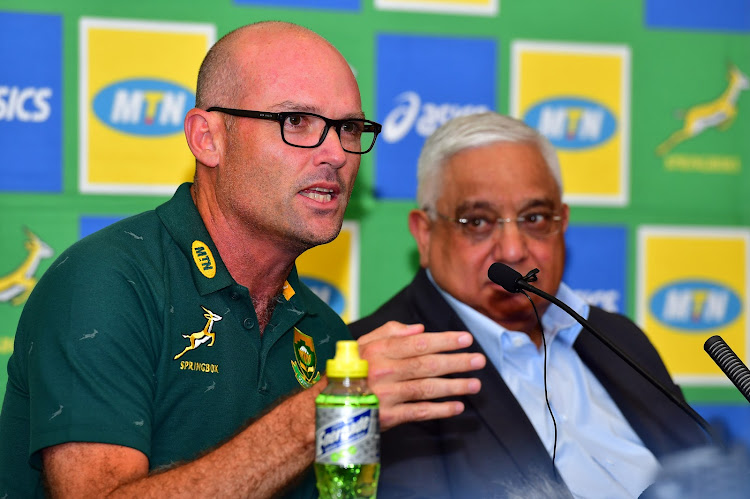 Newly appointed Springbok coach Jacques Nienaber is not about the reinvention of the Springboks wheel‚ but making sure what they have works even better.

Nienaber‚ a long-time associate of former Springbok coach Johan “Rassie” Erasmus‚ won't have the easiest of introductions when he starts with Scotland in July.

But with his appointment now confirmed‚ he's got enough time to survey the Super Rugby landscape before the international break.

With Super Rugby not having a break‚ there's going to be a steady stream of Super Rugby while Nienaber settles into the difficult Springbok coaching position.

Nienaber's intense defence was at the heart of the Boks' successful World Cup assault‚ but knows he won't be able to rest on his laurels.

“To get on top is tough‚ but the same also applies to staying at the top. It will be a nice challenge for us. When I went around to the franchises and I listened to the players‚ they all understood and accepted that‚” Nienaber said.

“We're not going to do things differently. We'll still continue with what has worked for us but it will be a nice challenge and something that I'll be looking forward to in terms of trying to keep the continuity and the culture of winning in the team.”

With Matt Proudfoot having joined England‚ he's been replaced by Deon Davids‚ who's last head coaching gig was with the Southern Kings.

Felix Jones‚ who was a replacement consultant when former Lions coach Swys de Bruin left the Springboks on the eve of the Rugby World Cup‚ has been roped in on a full-time basis.

Daan Human‚ who is the scrum consultant for the Bulls and the Cheetahs‚ has also been pulled in on a part-time basis.

Erasmus‚ who moved upwards to director of rugby‚ said he won't part of the day-to-day running of the team‚ but will be involved in the game plans and the strategies.

Erasmus's real job will be sifting through the talent that SA Rugby has to contract to keep the rugby talent within the four South African Super Rugby franchises.

“All the technical stuff in terms of planning strategically for a training session‚ all of that will be handled by Jacques. That takes up a lot of time and I'll be freed up from that. However‚ I'll still sit with them in camp and go through the strategies and the game plans. We'll sign it off together‚” Erasmus said.

“I'll still be hands on‚ but I'll have time to look at things like the contracting model‚ like the contracted players that have been seconded to the franchises. We've got about 85 players on contract and we've got a few bucks left‚ while we've accepted we can't hold on to some players because of finances. However‚ we're expecting that number to go up to 120 players.”