Boks out to prove Dragons’ record flatters them 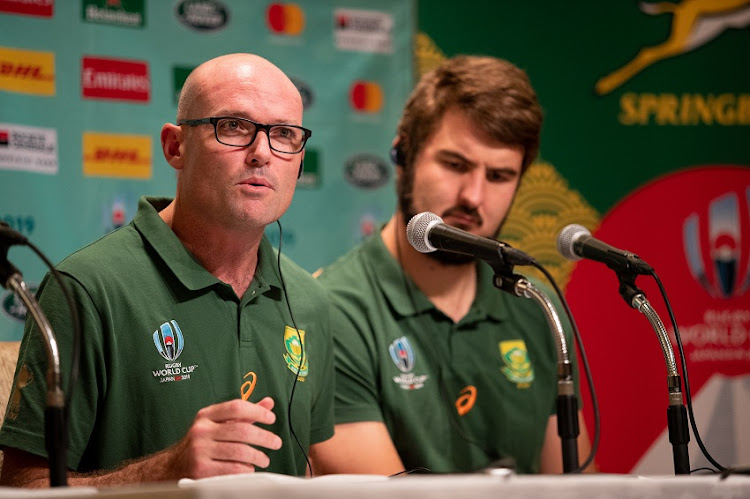 South Africa’s recent record against Wales continues to be an irritable talking point but increasingly the Springboks have talked down its significance.

The Boks have lost the last four matches against Wales and have lost five of their last six.

They keep stressing‚ however‚ that those defeats were suffered when they’ve been unable to assemble their strongest troops. Wales have taken liberties where they’ve been there for the taking. Fair play Wales.

The international window being shut‚ and northern hemisphere clubs flouting World Rugby’s Regulation Nine by discouraging their players from making themselves available for selection have conspired against the Boks.

There has of course also been some coaching upheaval‚ with some Bok coaches like Allister Coetzee going into battle with limited resources in the coaching stable.

So when Springbok defence coach Jacques Nienaber was asked about the Springboks’ recent record against these fire-breathing Dragons‚ he reached for a familiar‚ uh‚ defence.

“I’ve only coached twice against them with this group‚ and in both those games‚ we were limited in terms of team selection‚” he said about the Boks’ defeat in Washington last year.

Players in that game were rested for action against the Wallabies the following week‚ as well as the end of year tour last year that fell outside the Test window. Still though‚ even when you have your best troops available Wales have become a tough side to beat. They went unbeaten in 14 matches up until earlier this year when England brought their run to a halt.

“What makes them tough to beat?” Nienaber repeated a question as a means of buying time. “They are a well-balanced side‚ and they’ve got a great platform to attack off. They’ve got good backs‚ and a well-balanced kicking game.

“They’ve got a good defence system‚ and are quite stingy in giving points away. They were No 1 in the world within the last six or seven weeks‚ and they are pretty balanced in every department.”

Interestingly‚ though‚ they haven’t been that stingy in this World Cup. Rather uncharacteristically Wales have conceded 11 tries so far in this competition.

That is generous by their standards. Even lowly Uruguay got across the line against them as Wales mixed and matched their team‚ mainly through the pool stages.

The Boks have conceded just three tries‚ two against the All Blacks and one after a concerted effort from Canada.

“If you look at the results of the teams he coaches‚ he is very influential. I know him‚ had lunch and a few glasses of wine with him. He is a very likeable guy.

“Statistically last year‚ between him and Andy Farrell [Ireland’s defence coach] and New Zealand‚ they were the stingiest defences internationally. He is doing a great job – very respected.”

Part of the narrative leading up to Sunday’s clash is that the Boks‚ too‚ have become tough to beat. They’ve lost just once in 10 Tests this year and they are starting to tick all the relevant boxes.

“We have been pleased with our lineout performance throughout the tournament‚” confirmed lock Lood de Jager.

“But it’s a squad effort. It’s all the forwards knowing their detail and executing. Also‚ the guys who are not in the [match squad] 23 who really push us hard during the week.

“We’ve realised the set piece is massive‚ and if it doesn’t function‚ you are going to struggle to win games‚ especially against Tier 1 nations. It’s been a big focus‚ and against Wales‚ there will be a massive focus on the lineout‚ maul and scrum.

“The team that wins that battle will most likely come away with the win on Sunday. We are going to put a big emphasis on the set piece for this game.”