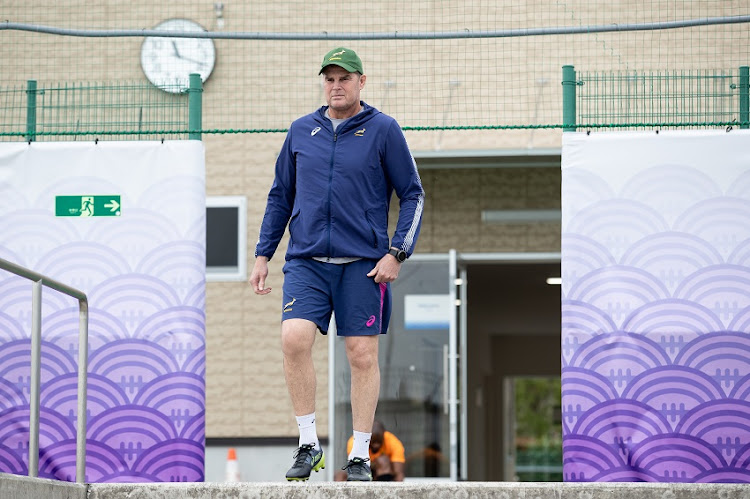 Erasmus is likely to keep his tracksuit close by and potentially hold the hand of the new man in charge of the Springboks next year.

After he announced his team to play Wales in the World Cup semifinal against Wales on Thursday‚ he was asked whether he would lock horns with Wales’s much garlanded coach Warren Gatland when the latter brings the British and Irish Lions to South Africa in 2021.

“I will be involved with SA Rugby as the director of rugby‚” said Erasmus.

“Depending on who will be the head coach‚ the director of rugby will definitely not have an office job behind a desk just thinking strategically.

"It will be a hands on job‚ very close to the head coach.

"I’m seeing the future‚ we will definitely compete again‚” he said about locking horns with Wales coach Warren Gatland when he brings the British and Irish Lions to South Africa in 2021.”

Even if a Springbok new head coach is installed next year‚ expect Erasmus to be involved in plotting some of the devilish detail that is going to go into the team's blue print.

Erasmus is unlikely to suppress the strategist in him.

With him tweaking his role and allowing a new head coach to slot into the seat he will vacate‚ it is unlikely SA Rugby will search far for a successor.

If they source from within former Southern Kings coach Deon Davids is likely to come into their considerations‚ in a set-up that would also give a strong voice to Bok defence coach Jacques Nienaber.

The latter is already a very vocal member of the Springbok coaching set-up and increasingly he is being handed greater responsibility on and off the training field.

Nienaber is one of Erasmus’ confidants.

They have been friends since they served in the Army in the 1990s.

They also studied together with Nienaber qualifying as a physiotherapist.

They were both in the set-up at the Cheetahs‚ then at the Cats before Nienaber was drawn into coaching. They have also joined forces at the Stormers and Munster.

The chance to coach against Gatland again in 2021 enthuses Erasmus.

“He is an absolute legend of the game‚ in many respects‚” he said of Gatland.

“You very seldom see fighting or mud-slinging involving him before Test matches.

"There is never ‘this’ or ‘that’. Before or after Test matches he is always very respectful. He doesn’t create unnecessary nonsense before a Test match.

“His results on the field speaks for itself with Wales and with the (British and Irish) Lions as well. He is a gentleman on and off the field and he deserves the credit he is getting.”