Why the Boks shook the rugby world 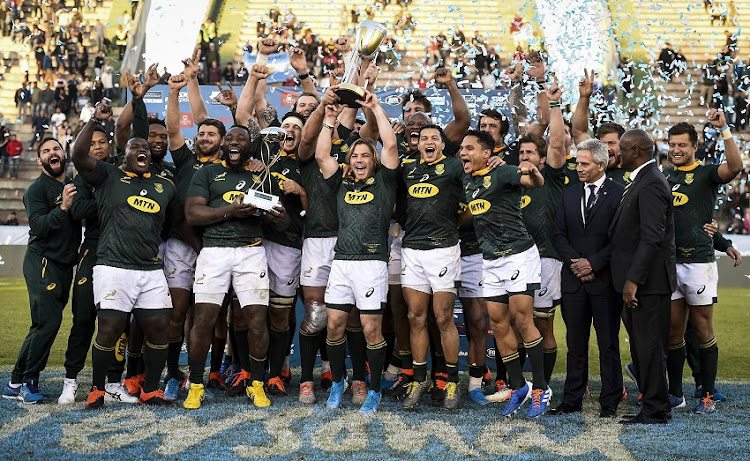 So then. The stage is set. Seemingly from nowhere the Springboks are now the most feared team on the planet going into the World Cup after a dominant Rugby Championship campaign.

In 18 months coach Rassie Erasmus has taken the Boks from a laughing stock to genuine World Cup contenders. Their rapid turnaround has shaken the rugby world and added another enticing subplot to the Japan showpiece starting in a little over five weeks from now.

The All Blacks have stuttered recently‚ and England and Ireland weren’t dominant in the Six Nations‚ leaving Wales as the preeminent northern hemisphere contender.

Rugby World Cup 2019 is suddenly the most open tournament in history with a resurgent Boks adding to the list of realistic challengers.

It feels like the embarrassing days of losing to Italy or being thrashed 57-0 by the All Blacks happened in a sepia toned era decades ago‚ and not a mere two years ago. That is testament to Erasmus’s brilliance in turning the Boks around with the speed of Aphiwe Dyantyi scorching down the wing.

Key to Erasmus’s success‚ which was affirmed by winning the country’s fourth-ever Rugby Championship title with a 46-13 win over Argentina in Salta on Saturday‚ has been a clear strategy.

He set out to achieve several small goals that would be steps to building a winning culture. There is a big picture but with micro attention to detail.

Most fundamentally Erasmus has given clarity. “Know your job and do your job‚” is an old saying that has been embraced by the Boks.

The players and the management staff understand Erasmus’s goals and processes. They are empowered to question‚ to think and to challenge in the appropriate settings. No forums in the Bok camp are closed. Players are welcome to attend selection meetings and listen in on why they may or may not be chosen.

Erasmus is inclusive but he is also direct. He wants no excuses‚ only responsibility for what a person is selected to do – be that at management or player level. Open debate and discussion are welcomed‚ gossiping and talking behind backs‚ is not.

Questioning is encouraged in appropriate convocations‚ but once the strategy is set‚ the team selected and the gameplan determined‚ Erasmus’s word is final. Then everyone has to do the job they have been tasked with total commitment. Know your job; do your job.

It’s this culture that is bringing more success and most importantly a constantly upward curve in performances and results. The World Cup may be a bridge too far after only 18 months of Erasmus’s stewardship‚ but the leaps the Boks have taken have been astounding.

He has managed to build depth in every position in 18 months‚ capture SA’s first meaningful silverware in 10 years‚ meet transformation targets and create a flexible gameplan.

Winning the Rugby Championship is confidence-boosting and a small prize for the path that Erasmus went on when he took the job last March but it is not the main goal.

There is belief in the Bok squad that they can win RWC 2019. A year ago that would’ve been viewed as little more than wishful thinking based in a decent historical record at the tournament and little else.

But 12 months on‚ the notion of the Boks winning is not fantasy‚ but well within the realms of reality.

There are still some small pieces needing to fall into place and some tough selection decisions to be made in the coming fortnight. But that won’t be an issue for Erasmus because he knows his job. And he will do his job.