Springboks out to maintain momentum in Salta 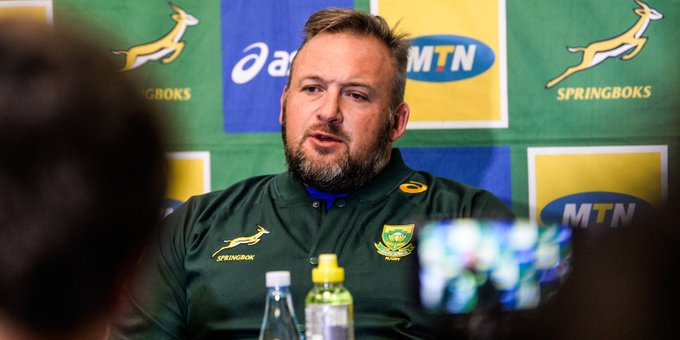 For the Springboks the chance of winning the Rugby Championship by beating Argentina in Salta on Saturday would be a happy by-product to the more important issue of building momentum before Rugby World Cup 2019.

That was the message from assistant coach Matt Proudfoot soon after the Boks landed in Buenos Aires to prepare for the third and final round of the truncated Rugby Championships.

The Boks are top of the standings after a bonus point 35-17 win over Australia at Ellis Park and a thrilling 16-16 draw against the All Blacks of New Zealand in Wellington.

But winning the Rugby Championship is secondary to maintaining their good form while also experimenting with team selections as coach Rassie Erasmus clarifies his thinking.

Upsets ?, nail-biters ? and shocks ⚡ - it's all happening in @TheCurrieCup. All the match highlights here ⬇. @DirectAxis #CurrieCupReloaded

He needs to trim a group of 38 players down to 31 for the World Cup in Japan‚ which starts in six weeks’ time.

“We would like to win the game‚ but our focus is to just continue with the momentum we built [against the Wallabies and All Blacks] and preparing for the World Cup‚” said Proudfoot.

“All four teams in the Rugby Championship are scrambling for momentum at the moment.

“We have this week and next week Argentina travel to South Africa‚ so I think it is two nice weeks where the two of us can pick up momentum‚ and use the opportunities to test the depth in our squads and our strategies before the World Cup.”

The Pumas are out of contention to win the southern hemisphere title after two defeats but they need to gain some confidence before the World Cup.

Condolences to the family and friends of one of the biggest legends of @AllBlacks rugby, from South Africa. RIP Sir Brian Lochore. https://t.co/dqXyasjknE

Taking a Bok scalp would be a huge boost after a mediocre Championship. And in Salta they have previously made life difficult for the Boks.

Proudfoot was part of the management under coach Allister Coetzee in 2016 when Argentina secured their first ever home win over the Boks‚ beating them 26-24 in Salta.

“We understand the challenges of playing in Salta‚ having won one and lost one there‚ and we know it will be another big challenge for us on Saturday‚” Proudfoot said.

“We understand the challenge of the game having come here last year and losing in Mendoza.

"We played them before that in Salta and won‚ and the year before that we lost to them in Salta. So‚ we are well aware of the challenge that the Pumas pose when you play them at home.”

Proudfoot hinted that there would be some more experimentation with team selection as the coaching staff looked to ensure they have tried all available possibilities before Japan.

“We will be making some brave calls this week‚ as we did against Australia and New Zealand in the last three weeks‚ as we prepare for this very important challenge‚” Proudfoot said.