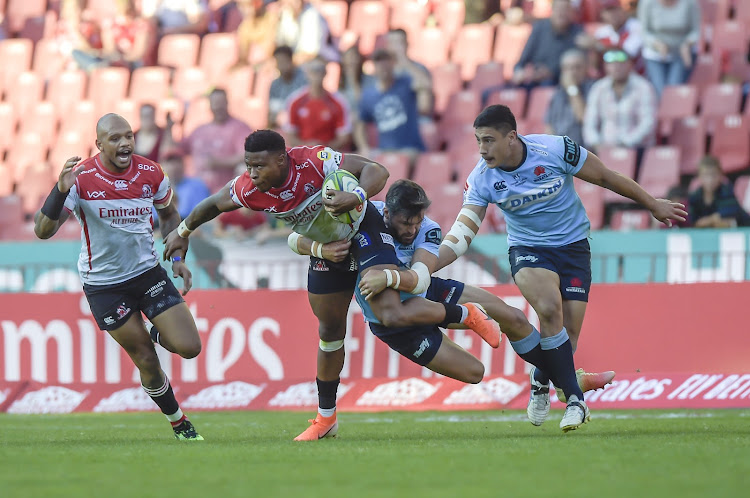 The Emirates Lions' Aphiwe Dyantyi (with ball in hand) and the Waratah's Adam Ashley-Cooper (tackler) in action during the Super Rugby match at the Emirates Airline Park in Johannesburg on May 11 2019.
Image: Chris Kotze/BackpagePix

This match for much of its duration gave credence to the maxim that possession is nine 10ths of the law.

At the end of it the Lions held on to the ball just about long enough to repel a feisty Waratahs side that will feel a touch unfortunate they are leaving these shores empty handed. They have now lost five out of their last six matches.

The win however breathes new life into the Lions’ Super Rugby campaign following their tour that yielded measured results.

Neither side was prepared to admit they would be occupying stools in the Last chance saloon in this clash but the result may have grave consequences for the Waratahs.

They were a much improved side and disrupted the hosts on all fronts.

So much so, the Lions only hit the front after the break.

When the Lions went into the lead they did so splendidly.

Four minutes into the second half flank Kwagga Smith exacted a turn over with the Waratahs hot on the attack.

Harold Vorster punched the initial hole into the Waratahs’ defence and after the ball was shifted to the right Warren Whiteley linked up with Stephan Lewies, who in turn transferred to Malcolm Marx who thankfully for the hosts had the gumption to look to his outside where Courtnall Skosan ranged up without a defender in sight.

Some of it was breathlessly audacious.

That the Lions were struggling to make meaningful inroads was betrayed by the fact that they, almost totally of character, opted to go for goal instead of going for touch.

The Shaun Reynolds penalty in the end made the difference and the Lions will be mightily relieved they got over this hurdle.

As you’d come to expect from a 3pm kick-off it was fast and frenetic from the outset.

The ball was moved across the width of the field with both teams, more often than not, making telling inroads.

Ordinarily there would have been concern in the Waratahs camp that they would not last the distance in Gauteng’s thin air but they had been camped out here for a fortnight.

Besides, they have crafty and intuitive ball players.

They also stood firm in the scrum, a pursuit in which they failed dismally a week ago when their front rankers were gored by the Bulls.

The visitors’ also fronted up in their maul defence, despite Lewies towering presence in the line-out.

Despite their shortcomings, the Lions will be pleased they got through this one.