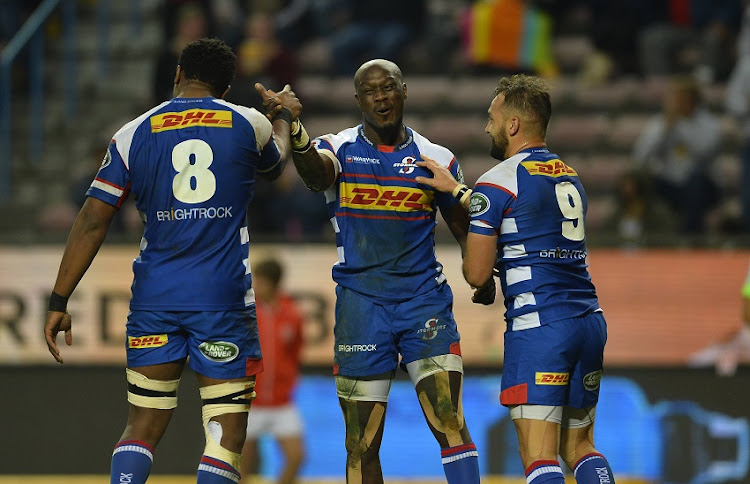 Raymond Rhule of the Stormers celebrate with team mates after scoring a try during the Super Rugby match between DHL Stormers and Cell C Sharks at DHL Newlands on July 07, 2018 in Cape Town, South Africa.
Image: Ashley Vlotman/Gallo Images

The Stormers ended their 2018 Super Rugby campaign with a little respect by beating the Sharks 27-16 in a tight battle that put a severe dent in the visitors’ play-off hopes on Saturday at Newlands Stadium in Cape Town.

Defeat for the Sharks has left them three points behind the Melbourne Rebels in a fight for the eighth and final play-off place.

But the prize for gaining it, will be a trip to Christchurch to face the Crusaders. Maybe that played at the back of the Sharks minds as they gave a tepid first half display before finding some spark after the break.

Overall the Stormers deserved their win, although they rode their luck as the Sharks squandered chances in the second half.

Centre Lukhanyo Am gave an audacious back of the hand pass to set Lwazi Mvovo away for a try, only for it to be called forward while also losing the ball as he stretched for the line late in the game.

Those costly errors allowed the Stormers to stay in front even though their pack were on the back foot through most of the second half.

The Stormers had to contend with the late withdrawal of flyhalf JP du Plessis, requiring a first start for Josh Stander, who gave a composed performance.

The youngster impressed with some clever play in the first half, creating the side’s first try with angled run and deft offload to centre Damian de Allende.

The Bok centre made another 15-metres before passing to marauding lock Cobus Wiese for the game’s opening try.

The Stormers were good value for their halftime lead that included further tries from centre EW Viljoen and wing Raymond Rhule, in his last game for the Stormers.

A missed penalty by Stander with the last kick of the half ensured that the Sharks’ heads didn’t completely drop.

It looked like the home side were cruising comfortably towards a rare win in this disjointed campaign, but as ever in 2018, nothing was simple for the Stormers.

After the break, the Stormers reverted to type, making numerous errors and displaying the lack of belief that is bred from losing 10 games, including the last four prior to this encounter.

The Stormers grew increasingly ragged as the Sharks tried to turn the screw, but the visitors, despite having all the possession, were also wasteful with it and were simply not good enough to win. And in reality, they are not good enough to be in the play-offs either.