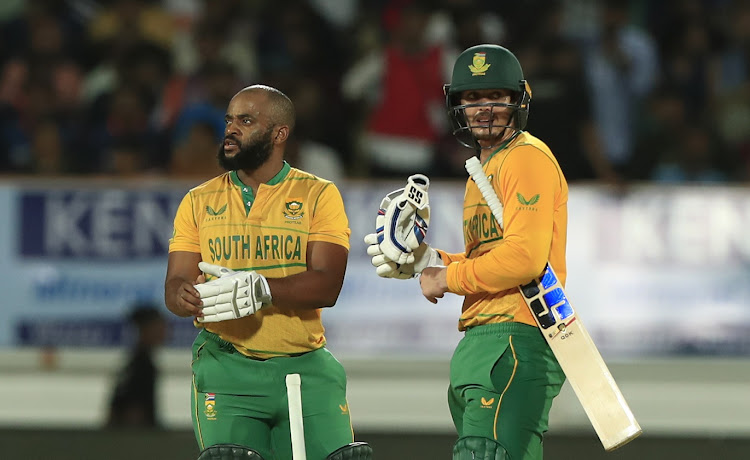 Proteas white-ball captain Temba Bavuma has said that the plan for the ICC T20 World Cup in Australia later this year is for him and Quinton de Kock to open the batting.

Bavuma struggled with the bat during the recent 2-2 drawn T20 series with India where he opened in two matches each with De Kock and Reeza Hendricks and scored 61 from four innings.

“Leading up to the World Cup, the talk has been for myself and Quinny (De Kock) to partner at the top, that was the plan going into the India series because we wanted to get consistency,” he said.

“Obviously with Quinny getting the hand injury (against India), he wasn’t available for some of the games and that opportunity wasn’t there, and myself also getting injured at the end we couldn’t really achieve that.”

Bavuma explained that Hendricks’s role in the team is of a replacement opening batter.

“Reeza is the replacement opening batter, that’s where we see him playing a role within the team and has been [the case] for a number of years and I'm not too sure why that is an area of discussion.

“Again, people out there feel that others should be getting the opportunity, but as a team we know what our plans are. I don’t think we have to be at a situation where we have to explain every single decision.

“People should look at our results and judge us on them. But Reeza is the replacement batter, Quinny and myself to partner at the top and that’s how I understand it.”

Bavuma admitted that there is room for improvement in his T20 game but defended his 50 overs performances.

Proteas stand-in ODI captain Keshav Maharaj has admitted that they are going to be tested by a buoyant England on familiar conditions during their ...
News
1 month ago

“I am not too sure in the 50 overs stuff where criticism comes from, I don’t know what my career stats look like but the last time I checked they were sitting quite pretty.

“Obviously as players we are always looking at ways that we can be better, the game has moved in such a way that you have to keep on getting better and better.

“The criticism I am not fully aware of, and what exactly is being said but from a captaincy point of view I think I have done fairly well. Again, I don’t know what the stats say but I think people who really follow cricket for the betterment of the sport will understand that.

“From a captaincy point of view, the numbers of wins that we have managed as a team, we have done pretty well.”