Proteas bundled out for 95 after Henry seven-for 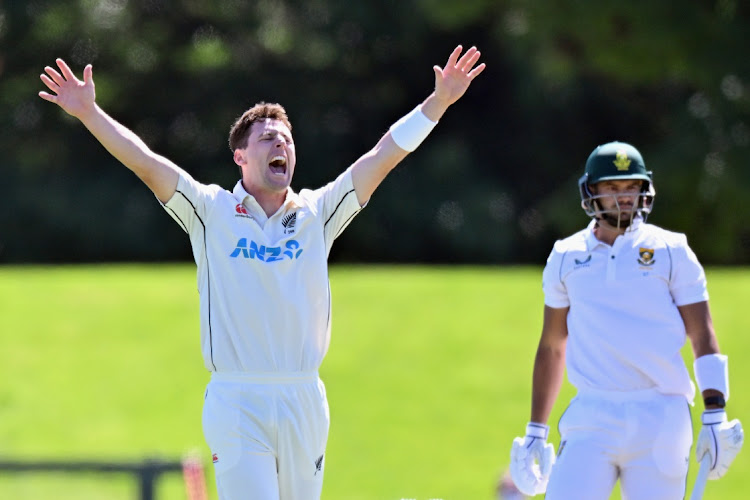 Matt Henry of New Zealand unsuccessfully appeals for the wicket of Proteas' Aiden Markram during day one of the First Test Match in the series between New Zealand and South Africa at Hagley Oval on February 17, 2022 in Christchurch, New Zealand.
Image: Kai Schwoerer

Matt Henry said a career-best 7-23 as New Zealand bundled out SA for 95 in two sessions to take charge of the opening Test in Christchurch on Thursday.

Playing his first Test in eight months because Trent Boult is away on paternity leave, Henry celebrated his return by registering the joint third-best Test figures ever by a New Zealander.

“Great to do it in front of my home fans, friends and family,” Henry said at the innings break.

“It's not always going to go in your favour when you play the odd game here and there.

“When you woke up and saw the overheads here at Hagley, you'd hope you're bowling first.”

Henry and his bowling team mates put SA to the sword in the opening session after Tom Latham won the toss and elected to field.

The visitors were 44 for four by lunch after their top-order had no answer to the relentless New Zealand attack.

Henry and fellow pacemen Tim Southee and Kyle Jamieson extracted considerable movement in the air and bounce off the pitch, hitting their line and length repeatedly and earning ample reward for their efforts.

The first four wickets were caught by the wicketkeeper or the slips cordon.

Jamieson chipped in with the wicket of Sarel Erwee (10), while Southee bowled well to claim his only scalp in Temba Bavuma for seven.

Zubayr Hamza made 25 and Kyle Verreynne scored 18 but lack of partnerships hurt SA.

Latham is leading the Blackcaps in the absence of Kane Williamson as he recovers from an elbow injury.

SA are without Keegan Petersen after the right-handed batter contracted Covid-19.

A lot has been said about the best batting position for Keegan Petersen, but the emerging Proteas top order batter prefers to continue at number ...
Sport
5 months ago

Despite allegations of “gross misconduct” hanging over his head, coach Mark Boucher will be at the helm when the Proteas travel to New Zealand for a ...
Sport
5 months ago
Next Article