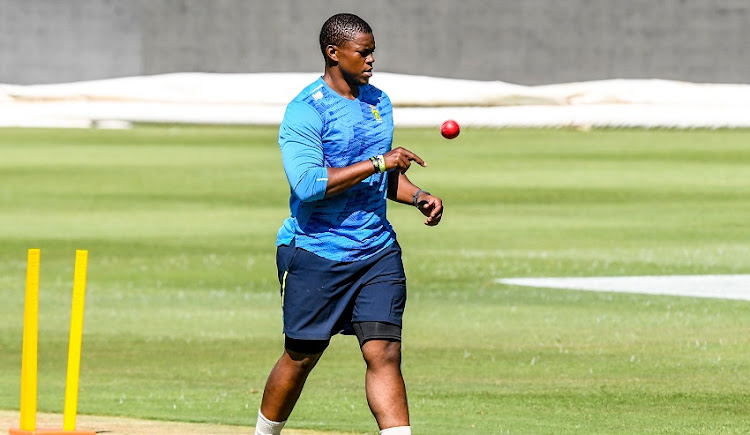 South African all-rounder George Linde has hailed fast bowler Sisanda Magala as one of the best death bowlers in white ball cricket in the country.

Playing in his second T20 against Pakistan on Sunday‚ Magala conceded a whooping 18 runs in his first over where he had to bowl 12 balls because of his three no-balls and three wides.

But he clawed his way back into the game to end with figures of 1/32‚ and stand-in captain Heinrich Klaasen trusted him with the last over where he played a role in the run-out of Usman Qadir and leaked only five runs.

“It just showed his character and I do believe‚ and I think a lot of guys believe‚ that he’s probably the best white ball T20 death bowler in the country‚” said Linde‚ who is once again going to be key for the Proteas in the third match at SuperSport Park in Centurion on Wednesday.

“We weren’t worried after that first over because we knew what was to come next from him. He knew what he had to do and he showed his character by bouncing back the way he did.

"I am very happy‚ for like‚ I am happy with other bowlers Beuran Hendricks‚ Lizaard Williams and Tabraiz Shamsi. All in all‚ I am very for everyone who bowled.”

Though he heaped praise on Magala‚ Linde had a fruitful match as he was named player of the match for his three wickets‚ including that of danger man Mohammad Rizwan‚ and 20 runs in the match.

“I am actually glad that he (Rizwan) came down the wicket because we tried to play with his arrogance a little bit but I am not saying that he is an arrogant person.

"It was just to try and force a poor shot out of him‚ the plan was to try and see if he will play a poor shot. It worked in our favour and we were glad to see the back of him because obviously he’s been unbelievable for them.”

Over the past few months‚ the Proteas have been inconsistent and Linde has asked South Africans to be patient with the team.

“Unfortunately in sport you will always get abuse and it doesn’t matter what you do. All I can ask for is for South Africans just to be patient because we’ve got this. Obviously its lot of new guys in the team‚ but we need a little bit of time to get experience and I can promise you we will come good.

“In the first T20 game on Sunday‚ we should have won that one because our performance was not that bad. On the day we were probably not good enough‚ especially in the last five overs‚ and that’s where we lost the game.

“With regards to where I prefer to play‚ I don’t mind because I like floating and I will play where ever the team needs me. I feel like I can adapt to any situation‚ so I practice certain situations at my own time or with the coaches to back my game plans.”