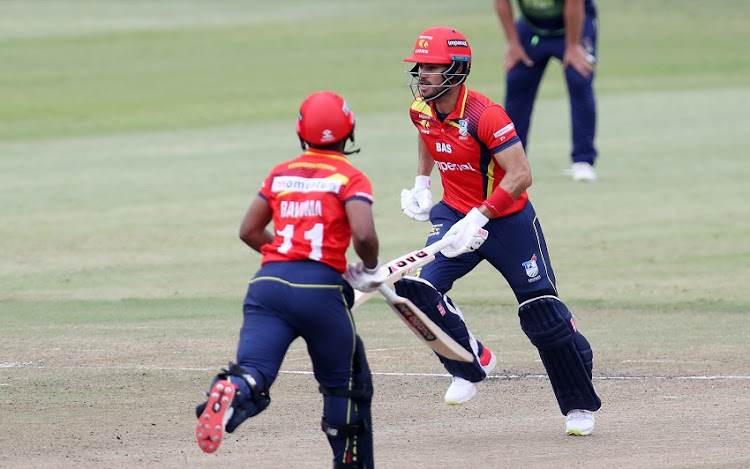 Reeza Hendricks helped the Lions complete their T20 Challenge regular season with a powerful seven-wicket win over the Cape Cobras in Durban on Friday.
Image: twitter/lions

A strong half-century by Reeza Hendricks helped the Lions complete their T20 Challenge regular season with a powerful seven-wicket win over the Cape Cobras in Durban on Friday.

The right-hander recorded his 27th career 50-plus score on his way to 75 off 59 balls (6 fours‚ 2 sixes) to anchor his side during their chase of 145 at Kingsmead‚ which they achieved with three balls to spare.

Earlier a much-changed Lions restricted their opponents to 144 for six thanks to two wickets apiece by Lutho Sipamla (2/27)‚ playing his first match of the campaign‚ and Bjorn Fortuin (2/29). Malusi Siboto and Wiaan Mulder‚ who were all handed first appearances by coach Wandile Gwavu‚ collected 1 for 33 and 1 for 16 respectively in a solid showing with the ball.

The Cobras‚ needing to win the game with a bonus point to have any chance of reaching the play-offs‚ won the toss and batted‚ but struggled to go big as they had done in their previous two matches.

They slumped to 32 for three after Tony de Zorzi (0)‚ Kyle Verreynne (21) and Jason Smith (2) all fell within the powerplay overs‚ with their plight further hampered by an injury to Zubayr Hamza‚ forced off the park not out on 6.

Christiaan Jonker did manage to find some sort of gear on his way to 44‚ with Corbin Bosch (32 not out) and George Linde (22) aiding him as they ended with a modest total.

The Lions then lost the out-of-form Ryan Rickelton (9) to Ziyaad Abrahams (2/29) early in the chase‚ but Hendricks and captain Temba Bavuma (29) snuffed out any hopes of a Cobras assault with a measured 84-run second-wicket stand.

The skipper eventually fell with the total on 101‚ but Mulder finished the job with a scintillating 25 not out off just 10 balls to give his side a sound win.