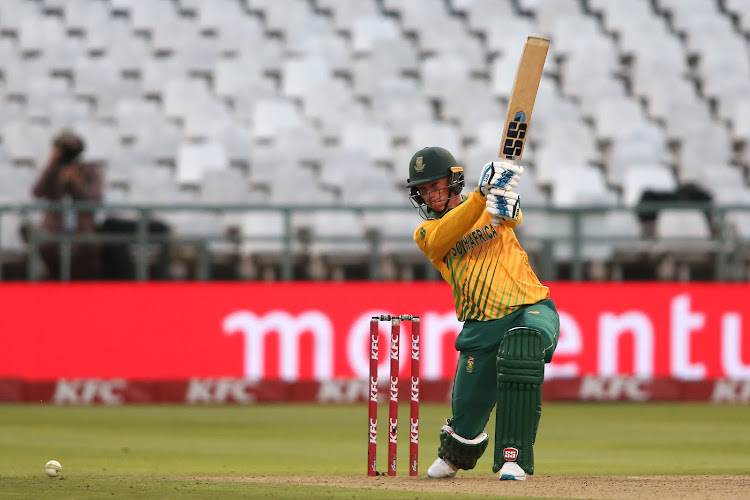 Rassie van der Dussen’s transformation from a stroke-less wonder on Sunday to a boundary-filled warrior on Tuesday was something to witness.

In one innings‚ albeit futile in the face of an stunning riposte from Dawid Malan‚ Van der Dussen threw himself back to 2018 Mzansi Super League boundary driller while scoring more runs at Newlands than he did in the previous two games.

That uptick in form‚ while it came in a dead rubber‚ bodes well for South Africa ahead of Friday’s first ODI at Newlands.

Van der Dussen‚ though‚ said as a team they still have to chart their path to find their utopia as a unit.

The T20 series whitewash inflicted by England is testament that South Africa is still far from reaching that particular point.

“If you look at a utopia‚ you’ll want to have your best players‚ play good cricket and want your disciplines to fire at the same time.

"In this series‚ we were decent with the bat and with the ball‚ at times we were good‚ but in each game‚ we had a bowler who went for 50‚ I’m speaking under correction‚ and we’ve missed our all-rounder‚” Van Der Dussen said.

“England keep coming at you even when you’ve taken wickets. You have to be realistic and the thing with realism is that is seeing things in context. We’ve started a journey in the winter‚ something I’m excited about and it’s very special to be part of that journey.

"The results aren’t going our way‚ but we have a clear idea of where we are going and where we are. We know how we need to work to get to where we want to be and that’s our utopia.”

One of the things that stood out in Tuesday’s nine-wicket hammering against England was Quinton de Kock’s captaincy.

At time‚ he wore a bemused and resigned look on his face as England’s withering assault left him bereft of options.

Van der Dussen stood up for his leader‚ saying that England are one of the best teams in the world and would have asked questions of any captain.

“It’s not tricky for De Kock. I don’t know why you should come up with that angle. Quinny is a brilliant captain and on the field‚ he’s got a brilliant mind. He’s good in the dressing room and he’s one of the best players in the world‚” Van Der Dussen said.

“You have to look at these things in context and England is one of the best teams in the world. They’ve got a settled team and they’ve played a whole summer of cricket while we played our last series a while back. We’ve missed a few key players.”