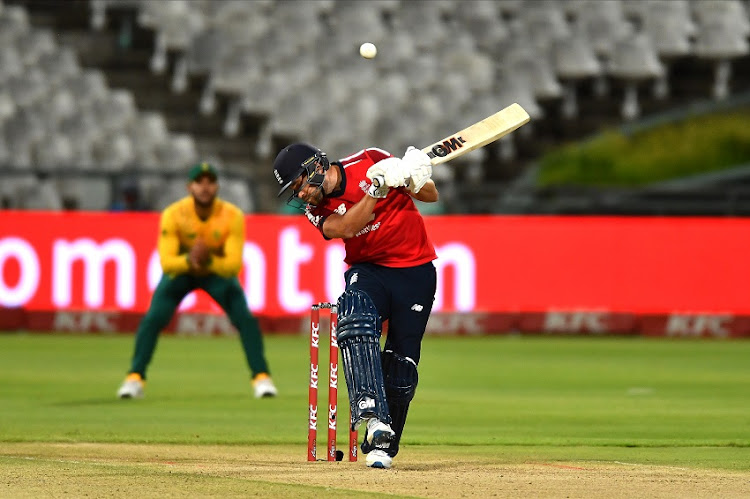 Rassie van der Dussen and Faf du Plessis did their best to stave off the ignominy of a whitewash at home, but Jos Buttler and Dawid Malan cakewalked what should have been a tough chase by nine wickets with 14 balls to spare.

South Africa, through the middle-order duo, batted out of their skins to get to 191/3 in their 20 overs.

A visceral assault of the highest order from Buttler and Malan in a world-record stand of 167 off 90 balls that saw England pass that score in 17.4 overs.

It was intense and exhilarating from England’s perspective, but from South Africa’s it was a sobering experience. It was a turkey shoot in every way imaginable.

Mishits went for six and when the ball was middled, it sailed further into the Cape Town sky on a night where little went right for Quinton de Kock’s charges.

Malan, who should have been run-out on 37 when De Kock fumbled a straight-forward run-out chance in the ninth over, motored to a 26-ball 50 with seven fours and one six and proceeded to brutalise the South African attack.

He finished on 99 not out off 47 balls with 11 fours and five sixes in what was an exhibition, but fluffed a chance of a 100 when he took a single with one needed of what was the last ball of the game.

Buttler (67), who took six balls to get off the mark, got to his 50 off 34 balls, but pressed home any advantages when given the chance.

Having shrugged off the early off of the palpably out of form Jason Roy in the fourth over off Anrich Nortje, they played themselves in, then proceeded to crush the hapless hosts in an awesome of initially measured, then unbridled aggression.

If England slacked off with bowling intensity, they made up for that with their imperious batting display that robbed SA of the consolation win.

South African teams are at their best when they have nothing to lose and the Proteas encapsulated this. Their approach, despite the early and rather needless losses of De Kock (17), Temba Bavuma (32) and Reeza Hendricks (13) was impressive, but came when it was least needed.

This approach was missing in the first two games where England’s smart bowling and clever use of the conditions constricted South Africa.

An unchanged England had the same purpose early doors, but lost their way and wilted in the fierce heat of the Van Der Dussen/Du Plessis assault.

Du Plessis and Van Der Dussen had both shown glimpses in both games SA lost, but didn’t quite have the same boundary hitting impact. Van Der Dussen, while not out of form, was under the most scrutiny because of his boundary-less knock in Paarl while his 28-ball 37 on Friday had three sixes, but the rest of the runs came from 25 balls.

There was crease time, but not the maximum impact in minimum time required for T20I cricket. The inhibitions were shed in the unbeaten fourth-wicket alliance that was worth 127, with the 50-run milestone coming off 36 balls while the 100-run mark was reached in 59 balls.

Van der Dussen’s 50 came off 23 balls with four fours and three sixes. In that process, he caned Jofra Archer for 22 runs, his most expensive over in T20 cricket. No prisoners were taken in his 32-ball knock with five fours and five sixes. Du Plessis was happy to play second fiddle in his 37-ball 52 with five fours and three sixes, but the important part was that SA scored 84 runs in the last five overs and 125 in the last ten. Malan and Buttler though had other ideas.