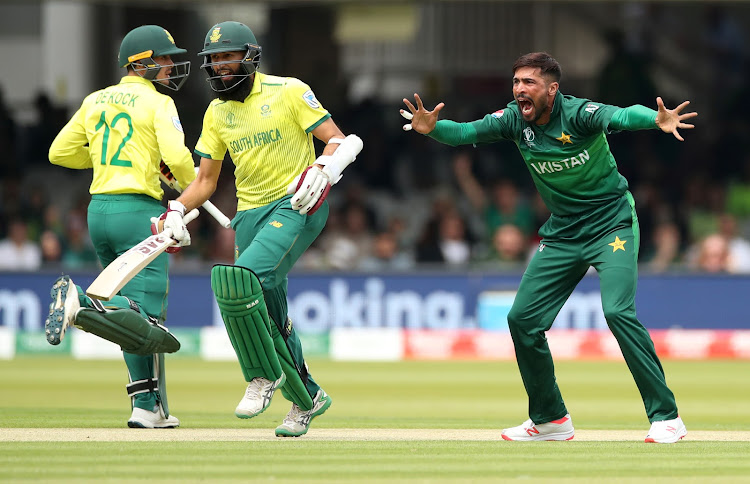 Aluta does not continua. And a good thing, too. On their strength of their performance against Pakistan at Lord’s on Sunday, South Africa do not deserve to be anywhere near the World Cup semi-finals.

They lost by 49 runs to snuff out the already slim they had of qualifying for the knockouts.

Pakistan won the toss and piled up 308/7 against South Africa’s insipid bowling.

But whatever the bowlers could do the batters could do worse — they dwindled to 259/9 in reply.

It wasn’t so much that they lost, and not even that they lost for the fifth time in seven games in this tournament. Defeat happens, and often without injuries to honour.

But South Africa were gutless on Sunday, and that will hurt them and their supporters like little else can. More than any of us, they let themselves down.

Their bowlers, save for Imran Tahir, were mere husks of the respected figures they used to be not long ago.

Their batters were worse, failing to take significant advantage of Pakistan making a hash of six catches — six! — to fall so far short of a competitive showing that the game was decided long before it ended.

Do not be fooled by the mediocrity of the scorecard: this funeral of an innings was abjectly funereal.

Not so that of the Pakistanis, who rattled through their batting gears at an impressive rate.

Fakhar Zaman and Imam-ul-Haq shared 81 off 91 for the first wicket. Then Babar Azam and Haris Sohail put on the exactly same amount of runs for the fourth — but from 23 fewer deliveries. Things got noisier still when Haris and Imad Wasim added 71 off 40 for the fifth.

Barbar’s 80-ball 69 endured into the 42nd over and Haris took his 89 — which flew off 59 — all the way to the penultimate delivery of the innings.

South Africa fought back in patches — the first 50 took 44 balls and the second precisely twice as many.

But the tide of the innings never turned, and all that remained to be seen as it entered its final stages was how far past 300 Pakistan were able to forge.

Chris Morris and Andile Phehlukwayo also went for more than a run a ball.

It was left to Imran Tahir to keep South Africa in the game, which he did by dismissing Farkar and Imam — by way of a brilliant, low return catch — and keeping the damage down to 41 runs.

South Africa might have lost Quinton de Kock to the second legal delivery of their reply, but Wahab Riaz at mid-on dropped the lofted drive off Mohammad Hafeez.

Not that that, and the other fluffed catches, made much difference in what became just another of the unfinished starts South Africa have shambled to in this tournament.

Du Plessis survived to share 33 with Van der Dussen for the fourth, and the latter stuck around with Miller to put on another 53.

And even with all that in their favour South Africa couldn’t find the performance they needed.

Instead they were properly hammered, as they have been almost every time they have taken the field in this tournament.

But this time was different: it was the first time at this World Cup that they beat themselves.

Now for their next trick — keeping it all together well enough not to embarrass themselves further in their remaining games against Sri Lanka and Australia.

Cruelly, pointlessly, aluta has to continua after all.